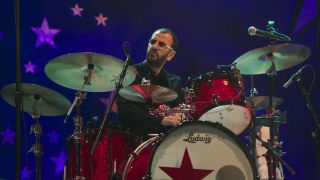 Let's all Come Together for this one. (Image credit: Michael Hurcomb/Corbis)

Arguably the most influential drummer in the history of pop, Ringo Starr may not have been the most technical player, but his contribution to the sound and direction of the genre can't be overstated. Come Together sits among his finest work, and while it doesn't encapsulate his general style, it's well worth analysing its clever rhythmic approach and amazing sound…

For more tips and tutorials on emulating classic beats and grooves, pick up the May issue of Computer Music (cm229).

Step 1: The intro is fabulously weird, with its triplet hi-hat flourish and tom tom fill. Our version features groups of triplet hits on toms and hats - we've made two variations. In Come Together, the hi-hats are played with the shoulder of the stick rather than the tip, and are opened slightly throughout the pattern - emulate this with a short open hi-hat on the fourth stroke.

Step 2: The drums in the verse have a heavy, oppressive feel, largely thanks to the floor tom ride pattern and the slightly behind-the-beat timing of the whole thing. You can create an ultra-basic tribal beat in this style very simply, by tapping out a tom on every eighth-note, emphasising those on the beat, and a 4/4 kick, keeping the whole thing as loose as possible.

Step 3: The last two bars of the second verse drop to just a 'swung' kick drum, and we've programmed a similarly direct and spacious kick 'fill' here. The two-bar chorus consists of nothing more than a kick drum on every beat and a backbeat snare, which you may well have programmed before, it being the foundational beat of numerous dance music styles, minus the cymbals.

Step 4: The guitar solo/bridge is where Ringo gets to stretch out, switching to a standard kick-kick-snare rock pattern with a riding cymbal and laid-back fills. To make this groove like Ringo, you should mix tip and shoulder strokes on the bow and edge of the ride cymbal, emphasising the beat with the latter - use a crash cymbal if your virtual ride doesn't include edge samples.

Step 5: One of the best things about Come Together's drum track is its gloriously tight, dry sound. To emulate it, use a snappy snare drum, ensure the kick drum is not too upfront, dial down the decay of the toms to mimic damping (or use samples recorded with damping), and keep the reverb low or off. A touch of vintage compression should finish things off nicely.