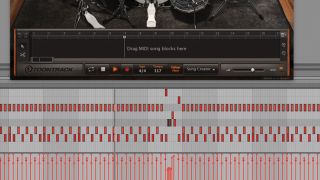 The distinctive sound of 60s Motown music brought about a number of musical innovations, including a range of now commonplace beats and fills that were first laid down by Motown sessionists such as Benny Benjamin and Richard 'Pistol' Allen.

In this tutorial, we'll create a series of grooves and fills inspired by the latter's work on I Heard It Through The Grapevine. To help you we have the accompanying MIDI files available for download.

Step 1: Simplicity is the key to many Motown beats, and a typical intro might consist of no more percussion than is necessary to conjure up the desired mood. In our example, pedalled hi-hats on beats 2 and 4 keep the beat, while the kick drum plays a 'heartbeat'-style pattern. This gives a moody, downtempo feel reminiscent of I Heard It Through The Grapevine.

Step 2: Here's a decidedly non-standard beat like the one employed by 'Pistol' Allen in I Heard It Through The Grapevine's verse and chorus, layering a tom tom over the pedalled hi-hats on 2 and 4. This keeps the vibe suitably dark, leaving plenty of space in the groove for other percussion, should it be needed - a conga line would be right at home here.

Step 3: If the fill heard at the end of the intro, chorus and bridge in I Heard It Through The Grapevine sounds familiar beyond this particular track, it's because variations on it appear throughout the Motown canon. Here's a version of said fill that's about as pared back as it gets, comprising just four strokes, befitting a sparse and direct track.

Step 4: If there was a version of the 'Motown fill' that could be considered 'definitive', it might be this one, leading from the high tom into a short snare roll, then two snare hits and a final floor tom. Variations include adding a third snare hit and moving the floor tom to the snare.

Step 5: The Motown fill is positively ubiquitous in the output of that and other R&B labels, and another classic soul drumming staple is the snare hit on every beat of the bar with kick drums in between. For a classic example of this in action, check out The Four Tops' Reach Out (I'll be There), also drummed by - you guessed it - Richard 'Pistol' Allen.

For more tips and tutorials on emulating classic beats and grooves, pick up theMay issue of Computer Music (CM229).