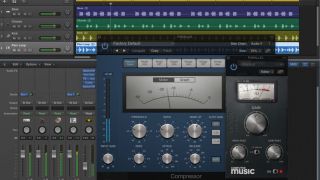 "A surefire technique for injecting forceful movement, character and 'pump' into dancefloor-orientated beats."

When your beats are sounding weak or flat, overt parallel compression could well be the answer. In this tutorial, we'll show you how to use multiple compressors on an auxiliary channel to add weight and power to a percussion track, complete with sidechaining for extra movement.

Step 2: The kick, percussion, bass and chords sound pretty good, but we can use heavy compression to add more vibe and motion into the beats - we'll have more control over this if we blend the heavily compressed signal in parallel alongside our unprocessed parts in the mix. Create an aux return or FX channel, mute its output for now, then send Perc Loop.wav's channel to this return by a 0dB amount.

Step 3: Let's obliterate the parallel percussion signal with extreme compression. Solo the return track, insert Ignite VST's Vice One on the channel, then dial the Threshold to -50dB, Ratio to 10:1, and Attack and Release to 0. Set Input Gain, Lookahead and Saturation to max, and the Makeup Gain to 6. This completely transforms the percussion loop into a flattened block of breathing weight.

Step 4: When building your own creative parallel compression setups, a good way to shape the exaggerated compression further is by lining up multiple dynamics processors in series - so let's flatten the remaining transient detail with Toneboosters' Barricade CM limiter. Load it after Vice One in the aux return's plugin chain, then set In gain to +20dB, Out ceiling to -20dB, then Attack and Release to 0ms. Smashing!

Smashed aux with limiting in the mix

Step 5: Un-solo the aux return, then pull down its channel fader to blend the effect alongside the other parts in the mix - we settle at -14dB. You can greatly influence how the squashed signal 'breathes' and interacts with the whole groove by sending different signals to the aux return in parallel. Send the bass channel to our parallel aux by -9dB and notice the unique movement we've created as the bass weight trips the compressor's gain reduction.

Smashed aux with bass signal - in the mix

Step 6: Pre- and/or post-compression EQ can greatly transform the way our dynamics processors squash various parts together, so experiment by filtering the parallel signal. Here, we'll load Satson CM right at the start of the plugin chain, before our dynamics processors. Pulling back the Low Pass dial to 1 o'clock subdues the high-end energy of the parallel signal while still retaining midrange movement.

Smashed aux with LP filtering at start of chain

Smashed aux with LP filtering in the mix

Step 7: Level automation or sidechaining can make the solid, compressed, distorted signal 'dance' around other track elements. Insert your DAW's compressor after Barricade CM, and route the kick to its sidechain input to trigger heavy reduction. A short 12ms Release exaggerates the 'pump', then another Satson CM, with its 12dB/oct Highpass at 11 o'clock, removes distorted bass frequencies.

Step 8: Finally, instead of using the 4/4 kick to trigger the compressor's gain reduction, try piping other elements of the mix into the compressor's key input. We're using the track's chords to pull down the smashed parallel signal whenever a chord hits, causing the signal's level to wildly pump and jump up in the gaps between chord notes.

Sidechained against chords in the mix