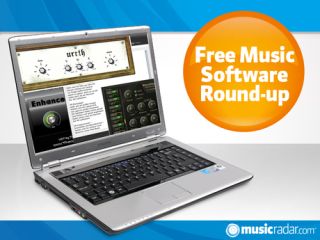 While many plug-ins these days can be rather confusing, this week's freebies all keep things relatively simple.

There's something rather charming about plug-ins that come with very few controls and promise to do something general rather than specific. Take Dark Mass, for example: it offers just Enhance and Amount controls, and is said to be an "audio enhancement plug-in" that "makes everything fatter, be it full mixes, drums, trance kicks, bass or solo guitars."

This is an Audio Units plug-in that doesn't actually make or process any sound. Instead, AUNotes - which was previously known as Notepad - is designed to let you keep notes within your DAW alongside an arrangement. Changes are saved with the project.

Gone are the days when you had to pay for your pitch correction plug-in: KeroVee is another free offering that features scale buttons and a tuning speed parameter ("maybe robotic if set to '100=MAX'" says the developer). There's a tune-to-MIDI function, too.

Five new plug-ins from SimpleVSTs, all with intentionally misspelt names. Uurth is an amp simulator; muun emulates an overdrive pedal; preamp is a guitar pedal simulator; spank is another amp sim; and duuaal a two-channel amp with built-in reverb. All look pretty simple, so give them a whirl and find out how they sound.