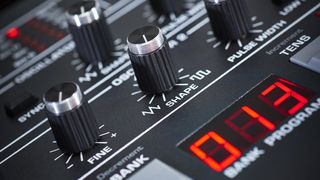 The name badge 'Sequential' - or Sequential Circuits Inc to give it its full name - hasn't been seen on a synth since the Prophet VS in 1986. The VS used a hybrid digital-analogue design, but their earlier products include the legendary, all-analogue, Prophet-5.

Dave Smith, the man behind SCI, went on to create a host of new kit under the DSI name, but has recently been handed back the keys to the Sequential brand courtesy of Yamaha. With this, he and his design team decided to build a synthesizer that harnessed the sound of analogue more fully than the current DSI line-up (that mostly use digital, or digitally-controlled, oscillators). To this end, the Prophet-6 uses discrete VCOs, and contains a stripped-down feature set that is heavily reminiscent of the Prophet-5.

Modern technology brings with it much greater stability and reliability - and adds a digital effects section - but the core components of VCOs, twin envelopes, single LFO and the Poly Mod section from over 30 years ago are still there.

Here we explore the Prophet-6 in more detail, with 9 ways to get more out of this modern classic.

The P6 has built- in dedicated stereo distortion circuitry. Although it's great for more gnarly sounds, it also works well at more moderate settings to spice up subtler sources.

The Prophet-6 uses a custom discrete design for its VCOs; the oscillators do not directly copy those on the Prophet-5 but still maintain a real sense of analogue vibe. Each voice has independently tunable oscillators and controls for waveshape and pulsewidth. The wave selection is achieved using a potentiometer control, allowing you to move slowly from a Triangle wave to a Pulse/Square, via a Sawtooth.

Osc 1's waveshape can be modulated using the Poly Mod section. It's easy to achieve another level of dynamic timbral control using the Filter Envelope to slowly move from the mellow triangle to much richer saw.

The Slop control has been found on DCO-based DSI gear as a way of imparting some VCO- style randomness to the circuitry. The P6 is VCO-driven, but its tuning is very stable- so it's still useful to add extra variation into the sound.

4. Two filters are better than one

The Prophet-6 has two filters run in series. The main filter is a four-pole design, whichattenuates frequencies above the cutoff point at a rate of 24dB/octave. This relatively steep filter curve is one of the most common in synth design and the P6 can progress into self- oscillation if required.

With keyboard scaling engaged (Keyboard button set to Full) the filter cutoff will move in semitone increments up and down the keyboard, giving you a third (sine wave) Oscillator. The high-pass filter uses a tamer 12dB/octave slope and can be used at the same time as the low-pass allowing the creation of band-pass filter sweeps.

MIDI or USB connectivity is used for transmitting and receiving parameter changes digitally but there are sockets on the rear that embrace analogue control.

The LFO on the Prophet-6 has five waveshapes (six including the Noise option with Randomselected and Frequency at max). Rev Saw is the perfect choice for creating pulsed note effects. Set the LFO to lock to tempo clock by engaging LFO Sync and start with 16th notes (selected using the LFO's Frequency knob).

Overall speed will now be controlled by the BPM control in the Clock section at the top of the front panel. Use Amp as a destination for the LFO and slowly bring up the Initial Amount - 12 o'clock should work well. If you don't hear level change, you may need to turn down Amplifier Envelope's Env Amount.

7. An arpeggiator and more

The built-in arpeggiator is undeniably a lot of fun, but if you get bored with the built-inpatterns (variations on up, down and random) then there's an easy way to create your own. In Assign mode the arpeggiator will play notes in the order that keys were pressed.

The fun really starts though when you press the Hold button. As long as one key remains held down, each successive note will be added to the arpeggiated sequence. Simply play a string of notes with a small overlap and you can create long and interesting repeated note sequences quickly and easily. Of course, there's also the built in sequencer…

The Prophet-6 has a low and high-pass filter. Although they have different slope specs they can work together to create a band-pass filter. Dynamic control of both is possible via the filter envelope.

9. Two button sequencing with a Prophet

Although the Prophet-6 possesses only two buttons in its Sequencer section, it is a great ideas generator and capable of some quite brilliant results when combined with tempo-locked LFO and effects.

Press Record to turn on sequencer recording and play some notes - that's it. However, this isn't a real-time sequencer, so each note is added to a stream of well- defined steps. Rests are easily added by pressing the Increment key. The best bit is that overlapping notes are all assigned to one step, so you can create multi-note steps very easily.

Moving between monophonic and polyphonic steps in a repeating sequence and then using the LFO to modulate filter cutoff (set to a different time division than the sequencer clock) and with a dose of the BBD effect makes for trippy evolving sequences of alluring complexity.

Unlike the arpeggiator, you can transpose recorded sequences by pressing the Record key and playing single notes in play mode.