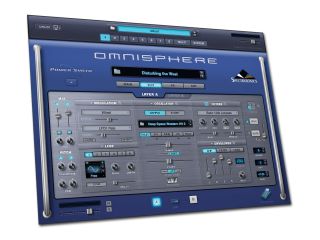 Spectrasonics' Omnisphere contains sounds of the like we've never heard before.

When you're making music, it's all too easy to pick a preset and succumb to 'that'll do' syndrome. However, if your productions are exclusively based on lifeless, out-of-the box tones, they're never going to be as dynamic and engaging as they could be.

1. Retrain your brain
Remember, the brain latches onto repetition very quickly. The more variation there is in your programming and production, the less the brains of your listeners will start to think, 'I've heard this bit already'. Keep providing change, whether it's subtle or dramatic, and your tracks will stay fresh.

2. Use 'real' sounds
The natural world only deals in constantly shifting sound. No two sounds are alike, so keep your brain open to the wonderful variation the world has to offer. Get yourself a mobile recorder, capture some sound and listen to it in depth. If you want to be a sound designer, begin to think how you could treat that sound to place it in a musical context.

3. Keep it simple
You don't have to be surrounded by complex plug-ins or synthesisers to create engaging, evolving sounds. Any synth worth its salt provides LFOs and envelopes and, with any luck, some modulation possibilities that'll enable you to turn lifeless patches into much more involved variants. Remember, anything unpredictable in a synth is good, so look for irregular LFO waveforms for a start.

4. Get sampling
Samplers have always been frontline tools for sound designers, and modern software versions are streets ahead of their hardware predecessors. They're packed with modulation possibilities, often contain unusual internal effects sections, and have the advantage of slotting right into your DAW's workflow.

5. Embrace effects
Remember, when you're looking to design interesting sounds, effects shouldn't just be an afterthought or part of a last-minute fix, but rather an integral part of the process. Get creative with your plug-ins by running sounds through unusual processes, or bouncing stretches of audio and processing them with backwards reverbs, syncopated delays, or the twisted effects sections of synths and instrument plug-ins.

6. You've got to move it
Don't tolerate lifeless elements in your tracks. There's no excuse for not giving even functional parts some movement. Remember, this can come through synthesis parameter automation, the use of modulating plug-ins, or audio editing techniques, to name but three possibilities.

7. Picture this
If you're writing for picture, you'll need to be as much a sound designer as a composer, so get techno-savvy and invest as much time as you can in finding out how dramatic rhythmic grooves can be constructed. Mixing orchestras and real instruments with carefully chosen 'otherworldly' grooves often works very well indeed.

8. Master MIDI and audio
Remember that MIDI and audio processing work in perfect harmony within your DAW, and that you should draw on the strengths of both approaches when working as a sound designer. MIDI's instant triggering and ability to layer notes and sounds in a trice is powerful, but bouncing entire loops before chopping, trimming, looping, reversing and stretching is better done with audio. Get good at both.

9. Let loose
Anything random should be encouraged, at least initially. When you're working with real people, you can't be a control freak, so try to adopt the same attitude with your studio tools. Try to encourage the unexpected. 75% of what happens will be unusable, but the remaining quarter may well inspire you.

For a complete guide to organic sound design, check out the December issue of Computer Music (CM133) which is on sale now.