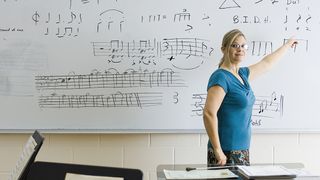 Learning music theory but finding yourself befuddled by all the technical terms involved? Our glossary has you covered, busting every bit of chord- and scale-related jargon from 'ascending' to 'unison'.

Ascending
Rising in pitch, or going up the piano keyboard from left to right.

Cadence
A short sequence of notes or chords at the end of a musical phrase.

Chord
More than two notes played at the same time.

Circle of fifths
A diagram charting the relationship between the 12 notes/keys in the chromatic scale.

Descending
Falling in pitch, or going down the piano keyboard from right to left.

Diminished fifth
An interval of a perfect fifth flattened by one semitone - eg, C-Gb or A-Eb.

Dominant
The fifth note of a scale, an interval of a perfect fifth above the tonic. Also, a chord built on this fifth note.

Flat
Determines that a note should be one semitone lower in pitch.

Harmonic interval
Notes of different pitches played together at the same time, as opposed to one after the other.

Harmony
A tune that complements a melody when played at the same time. Also refers to the relationship between a series of chords.

Interval
The difference between two note pitches. Intervals are named according to the number of letter names they span, eg from C to D is a second, C to F is a fourth, etc.

Inversion
The order of notes in a chord is changed. A first inversion would see the root shifted up an octaveto the top of a chord.

Key
The scale on which a piece of music is based. The key takes its name from the tonic, or first note of this scale.

Major scale
The most common scale in Western music. A series of eight notes with a set pattern of intervals: 2-2-1-2-2-2-1.

Major second
An interval of two semitones between two different notes. For example, C to D is a major second interval.

Major seventh
The interval between the root note and the seventh note (or 'degree') of a major scale. Equivalent to 11 semitones.

Major sixth
An interval of nine semitones between two different notes. C to A, for example.

Major third
An interval of four semitones between two different notes. Examples include C to E, G to B, D# to F.

Melodic interval
When two notes of different pitches are played one after the other - in other words, atwo-note melody.

Melody
A sequence of notes played one after the other to produce a tune.

Minor scale
The sad-sounding sequence of notes you get when you play a major scale from the sixth note upwards.

Minor second
An interval of one semitone between two notes. For example, C to Db is a minor second interval.

Minor third
An interval of three semitones between two different notes. For example, C to Eb is a minor third interval, as is G to Bb.

Minor seventh
The interval between the root note and the flattened seventh note (or 'degree') of a major scale. Equivalent to ten semitones.

Minor sixth
An interval of eight semitones between two different notes. For example, C to Ab is a minor sixth interval.

Mode
A type of scale built by starting another scale from a note other than its root.

Octave
An interval of 12 semitones, at which the two notes have the same 'quality', just one higher and one lower.

Root
The lowest note of a chord or scale. C is the root note of a C major chord and of the C major scale.

Rootless voicing
When an extended chord is played with the root note missing. Used a lot in jazz and gospel music.

Scale
A sequence of notes going up or down the keyboard with a particular pattern of intervals between them.

Secondary dominant
The name given to a chord based on the fifth, or dominant, note of any key or scale other than the tonic key.

Semitone
The smallest interval in a chromatic scale, or the distance between any two notes on the piano keyboard.

Seventh
A four-note chord formed by adding the seventh note of the scale to a triad that already contains a root, third and fifth.

Sharp
Raised in pitch by one semitone.

Tone
Short for 'whole tone', an interval of two semitones.

Tonic
The first note, or 'root' note, of a scale.

Transpose
To shift a piece of music, note or chord up or down in pitch by a certain number of semitones.

Triad
A chord made up of three notes. A major triad contains a root, a major third and a perfect fifth.

Unison
An interval that's not an interval - in other words, the interval of zero semitones, the same note played twice.

10 easy music theory tricks that every producer should know

6 chord tricks for songwriters and producers

8 things that everyone should know about music theory