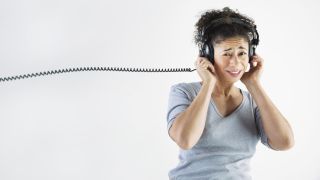 It sounds bad... but all may not be lost. (Image credit: Monalyn Gracia/Corbis)

So you've recorded your singer and you're all set to drop the vocal into your latest masterpiece. But wait a second, doesn't it sound a little bit... off?

We've all been lumbered with a dodgy vocal performance from time to time. This can happen if you've recorded it somewhere with ropey acoustics or bad microphones, or if your singer just doesn't have the skills.

In an ideal world you'd just go back and re-record but often a lack of time, tech or talent piles on the pressure and you just have to work with what you've got. Here are 15 ways to polish a vowel movement…

Let's start with an obvious one - we're sure we don't need to explain what this is, do we?

This ubiquitous technique has been used on the majority of pop records for almost 20 years now. Sometimes subtle but often far less so, it's never been easier to lock a vocal track to exact pitching. You can use Antares' Auto-Tune, of course, but many modern DAWs have some kind of automatic pitching tools built in. Logic X features Flex Pitch and Melodyne is integrated within PreSonus's Studio One, for example.

Try mixing an untuned vocal with the same tuned version for instant thickness and warmth.

Similar to Auto-Tune, this old-school process can take an out of tune vocal and conjure up a perfectly pitched version. However, the method is somewhat different, as a vocoder takes the signal from an instrument (such as a synth or strings) and applies the vocal properties using band-pass filters. The technique even works with spoken words.

Hundreds of artists have used the "VOice enCODER" over the decades, from Donna Summer to Daft Punk. Pretty much every DAW has an onboard vocoder, so try it out for yourself for instant Imogen Heap.

A completely dry vocal take will normally contain loads of breaths, lip-smacking and other random mouth sounds. This is especially true if your singer is mic'd closely or likes to swallow the microphone when performing.

There is only so much noise that pop shields and foam windshields can remove, so you'll need to work on the audio file in your DAW to remove those remaining weird sounds. A carefully adjusted noise gate plugin should fix most of the problems, and you can manually strip out the remaining pops and clicks. Keeping an 'in' breath before each line helps keep your singer sounding human.

While we're on the subject of manual editing, let's talk about comping. The best mix engineers edit vocals in forensic detail, not just down to sung lines but in sections as short as individual words and syllables.

This micro editing of vocal takes is undoubtedly very time consuming, but selecting only the best parts of an otherwise average performance can transform a so-so singer into a dynamite diva.

It's easy to get this kind of precise comping wrong, so make sure that you try and stick to your vocalist's natural timing and use small fades to prevent clicking during the edits.

Have you ever wondered why your own singing sounds far better in your bathroom? That's because of all the hard surfaces causing reflections and ambience.

Use this knowledge to help your struggling chanteuse sound better by using a nice bright reverb setting. Sibilance can sound harsh with lots of reverb, so try de-essing just the vocal part that's being fed to the reverb unit.

Delay can also be used to great effect to disguise poor vocal performance: if your singer is really struggling then you'll need more feedback and a wetter output.

If your dodgy vocal has been recorded too hot and is clipping the peaks, then these two distortion effects are perfect for concealing the problem. Although they are normally used as a stylistic choice, rather than a necessity, various iZotope plugins and AudioEase Speakerphone 2 have telephone and megaphone presets.

However, it's pretty easy to approximate your own version of the effect by emphasising a mid to high frequency range and cutting the rest using high- and low-pass EQ filters. Run the resulting signal through a distortion plugin to add bite. The Buggles did it best.

Pretty much any effect that a guitar pedal is designed for can also be used on a vocal. In fact, the more processing you apply to the signal chain, the more chance you'll have of disguising your singer's shortcomings.

The Beatles were masters of pedal pushing, and a multitude of effects can be heard on albums such as Magical Mystery Tour, which made liberal use of the Leslie Rotating Speaker pedal.

Backing vocalists are the unsung heroes behind every great singer. If your star is having trouble hitting their groove in the vocal booth, then a talented backing group could help them find their way.

Some backup artists step into the limelight themselves (such as Sheryl Crow who, prior solo success, accompanied Michael Jackson on his Bad tour). Others never emerge from the shadows.

When it comes to mixing your vocalists, you might find that turning down the fader of the soloist and pushing up the harmonies helps to hide a wobbly note or two.

9. Double with a good vocalist

If you're dealing with a singer who insists that their vocal is beyond compare and that you simply must use it, then sometimes you have no choice other than to do just that. However, you can always add an additional lead vocalist to disguise the bad one.

Bringing in great singers to improve the sound of poor ones is an old studio trick and has worked to the benefit of more than a few 'stars'. Just be careful not to take things too far and ditch your diva's voice entirely when you're mixing the vocals together.

This technique can be used to compensate when your singer's diction is sloppy. Overlaying a whispered version of the same vocal alongside the lead performance gives a very intimate sound and increased clarity.

This is a subtle effect but it's actually a common technique used in lots of hit songs. You can easily record yourself with a close mic'd breathy monotone whisper in time with the lead vocal. Treat the whispered part with plenty of compression and saturation to keep the dynamics constant.

11. Double up with other instruments

But what if your singer simply refuses to allow another person into the mix? That's when you can pull out the secret weapon of doubling up their vocal with an instrument instead. Play a piano, synth or string melody alongside your singer's vocal and it will help to divert attention away from any wonky warbles.

Nowadays, you don't even have to play the instrumental melody into your DAW as most feature an audio-to-MIDI function. Run your vocal melody through this process to extract the MIDI data and simply assign that to your chosen instrument.

Once the sole preserve of happy hardcore anthems, speeding a vocal up or down has suddenly become fashionable again. We've heard it on a fair few hits in recent years.

To do it yourself, it's a simple matter of stretching the vocal in your DAW and turning off the timestretching. You can also try formant shifting and using a plugin to alter the character of your singer's voice, going so far as to turn a female singer into a male one and vice versa.

13. Repeat it again and again (and again)

If you're not too precious about the structure of the song, choose just the best couple of vocal lines and use them as the sole hook in your track. Just make sure that your vocalist doesn't mind most of their hard work going in the bin.

The constant repetition can become strangely hypnotic with the right backing arrangement. If you're lucky you'll write a huge ear-worm like Call On Me or Keep On Jumpin'.

For variation, change the chord sequences underneath the vocal now and again. This will maintain interest and keep the track flowing.

If all else fails then you can always butcher the vocal and isolate individual syllables and sounds. Transpose and stretch these snippets to reconfigure them into a new melody. This won't make any sense as a sung lyric, but a clever arrangement can make a successful track in its own right. Just look at Push The Feeling On, which became a huge hit using exactly this technique. Some producers, such as Todd Edwards and Martin Garrix, have built entire careers based on this method of splicing singers.

Some producers use short snippets of singers, load them into their samplers and then play melodies with them. Judicious use of pitchbend can make one repeated sample come alive, as new melodies are conjured from a simple one-shot.

Cashmere Cat does this well, using just a couple of different vowel sounds for this entire track. He takes a very modern approach here, but this effect has been around since the 1980s, stemming from house music's pioneers and eventually soaring to the top of the charts.