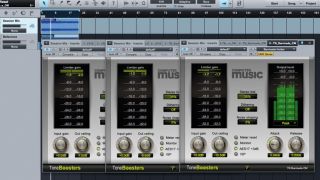 Distributing your limiting between several plugins can result in a more natural sound.

MASTERING WEEK: The art of mastering is shrouded in myth and mystique, but with these 12 no-nonsense, practical tips, we aim to clear the conceptual fog and help you get your finished tracks sounding better than ever.

Don't expect mix problems to be solved at the mastering stage! EQ clashes, dynamic issues and other errors are all best addressed from within the mix project. If you're applying drastic amounts of processing, revisit your mix - or if you're mastering for someone else, explain the issues and see if they can remix.

Don't over-listen to a track! Pro mastering engineer John Paul Braddock explains: "What I don't want to do is to listen all the way through the track for six minutes, because as soon as I've done that, I've got used to how it sounds, rather than being objective. It's crucial that we don't spend too much time listening to the music. This might sound counter-intuitive, but we're not mixing it any more. We're not trying to listen to the detail; we're trying to get an overview - to sample the overall tone of the song."

Once you're ready to master a track, don't just dive in and start processing. The aim is to gently improve, not 'mix'. Take a more considered approach. Briefly compare the mix to a reference track at equal level, plan exactly what correction or enhancement the mix needs, try it out, re-level, then evaluate.

Type in parameter values and use stepped plugins (with fixed 0.5-1dB 'notched' controls) where possible. It's easy to just crank up a knob, but typing in values makes you think about what you're entering. Stick to 0.5/1dB steps at a time, as half a dB will make a significant difference when mastering.

Use 'sum difference' testing (also known as a 'null test') to hear if a plugin is 'passive'. Get to know which plugins add gain boosts or frequency changes in their default state. John Paul Braddock again: "Many plugins will actually apply a tonal or level change even before any settings are dialled in. I've noticed that, after analysing several types of plugins, you'll load up a plugin with 'no processing', but the actual output might be louder. Perhaps those plugin manufacturers know what we now know - that 'louder sounds better' - or maybe that's just a side effect of the plugin's design. The important thing is that you analyse the tools you're using, and don't make assumptions. Be critically aware of your own tools."

Remember to compare your final processed master with the unprocessed session mix - at equal level - to see if you've actually achieved the outcome you intended. If not, don't be afraid to start again from scratch.

Several gentle stages of limiting or compression can help take the load off one single plugin. For example, three limiters with gain reduction of 1dB might sound more natural than a single 3dB limiting stage. It depends on the plugins used, so give it a try, and listen objectively.

A plugin with an unlinked left/right mode can also be used to process in mid/side. Simply load Voxengo's free MSED on the channel and set it to Encode. Now load your plugin after MSED and unlink the left and right channels. Place a second MSED last in the chain, and set it to Decode. The left side of your plugin now processes the mid (mono) part of your signal, and the right affects the side (stereo).

For transparency, try to use as few EQ or excitement stages as possible. So, if a track has too much bass and not enough treble, try using a single broad shelf to cut bass, then re-level by increasing the EQ's makeup gain. This will shift the track's weight towards the treble more naturally than two EQ bands.

Regular downwards, full-band compression can clamp down on peaks and transient detail, ruining dynamics if not applied carefully. If your track needs extra average weight, consider blending it in through the use of parallel compression - you can bring up the average level of your track while keeping the detail intact.

A touch of downward compression can pull (or 'gel') the overall mix together, but keep attack times slow so you gently clamp down on the mix's sustain and not the transients. A low ratio and around 1-2dB of gain reduction should be all that's necessary.

Many think of limiting and loudness as the main staples of mastering, but this attitude often leads to amateur results, flattened mixes and distortion. Final peak limiting should only be tackled when a track's overall tonal, dynamic and stereo balance are in order. So leave limiting till last!