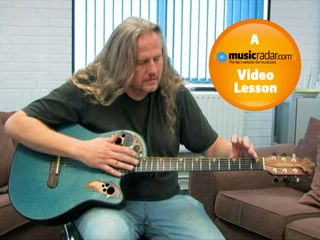 Preston's first improvised piece for us demonstrates how he adds chords to a simple bass and snare drum style groove on acoustic guitar.

He establishes this basic groove in the first four bars and keeps it running as the piece becomes more complex. Preston adds some offbeat percussive strikes to his groove in bar 5 (played over the neck with his fret hand) but follow the bass and snare groove to help you keep in time.

At the end of bar 8, Preston adds a chordal pull-off/hammer-on idea. It's tricky to fit these chords into the groove so listen out for the initial percussion groove.

Finally, Preston's tuning from low to high is CGDGGD. This means the second and third strings are in unison with each other. They're exactly the same pitch! Preston detunes a further semitone too, but we've notated this in C for your convenience. You could even just play in drop D because all the notes are on the fifth and sixth strings, tuned a 5th apart.

Next page: tab for the video example

The percussive tab shows the stems of the notes pointing downwards for pick hand strikes and upwards for fret hand strikes. Check the cross-headed notes for the percussive hits on the guitar body but look at the video to see exactly where Preston hits his guitar.

Starting with a basic groove, this piece builds into a series of cross-handed manoeuvres, which is hard to keep track of at first. Remember the bass and snare pattern remains constant throughout, which will help keep you solid when adding the chords and grace notes.