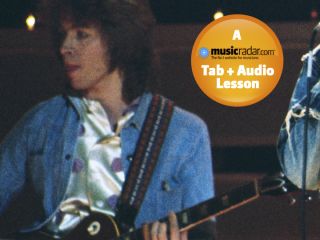 It's the 5th of July 1969 and arguably the biggest rock and roll band in the world are about to take to the stage. The venue is Hyde Park and upward of half a million Rolling Stones fans are enjoying the sunshine and waiting with eager anticipation to witness the debut performance from the new boy, Mick Taylor.

They're also waiting to pay their respects to the band's much loved ex-guitarist and founder member, Brian Jones, who had been found dead just two days earlier. No pressure there then.

At that point Mick was just out of his teens and fresh from his three-year apprenticeship with John Mayall's Bluesbreakers, a particularly fertile training ground for superb blues guitarists when you consider his predecessors were legends Eric Clapton and Peter Green.

Taylor's addition to The Rolling Stones seemed to breathe new life into the band, with his lyrical and melodic guitar style inspiring a change of direction to include more country-blues and folk elements within the group's sound. It's undeniable that Mick's contribution greatly expanded the Stones' sonic palette, and helped them to achieve and maintain what many consider to be the quintet's creative and commercial peak.

Whilst Mick continues to maintain his position as one the UK's supreme blues guitar talents, with numerous releases to his name as both a band leader and as a sideman, we've decided here to concentrate on the Rolling Stones period of his career. His contribution to one of the greatest bands of all time was massive, and deserves all the recognition and praise we can bestow upon it.

There are two complete solo studies for you here, the first using orthodox playing technique over a C7 straight eighth-note groove, whilst the second solo, over a standard 12-bar progression in E, showcases Mick's technique of executing slide in standard tuning. Whilst there are many guitarists that have adopted this method successfully - Joe Walsh, Jeff Beck, Brett Garsed etc - this area is widely considered to be Taylor's speciality.

Arguably his take on standard tuning slide guitar sounds the most 'authentic' (ie, open tuning and fingerstyle) which considering the unorthodox nature of its execution is no mean feat.

As always, treat these solo studies as the springboard to further exploration, and remember to have fun. It may only be rock and roll, but how we like it!

Next page: audio and tab examples

[Bars 1-2] The trick to achieving the bend in bar 1 is to initially support the second finger, but once this bend is in place you need to allow the first finger to resume its usual function of fretting notes. This may take some time so be patient, and it may be an idea to select a guitar with fairly light strings. It's also crucial that you don't have a floating vibrato system, as the poor bridge won't know if it's coming or going and the tuning will be all over the place. That's why country players like Teles!

[Bars 3-6] Mick openly admits that he doesn't consider scales when he's soloing, preferring to think of the underlying chord tones. With this in mind we could consider the majority of the material contained within these bars to be either derived from the major pentatonic scale (R 2 3 5 6), or from a major triad with the additional 2nd and 6th degrees. We come up with the same answer but the second is arguably more flexible, as it allows us to select other appropriate intervals at any point (eg 4th) and drop them in at any point, as we do here in bars 4 and 5.

[Bars 7-8] It's undeniable that BB King and Eric Clapton would have influenced Taylor. Like Clapton, Taylor served his apprenticeship as a Bluesbreaker, and a modern blues player without a hint of BB is almost inconceivable. Taylor's use of this three-against-four rhythmic displacement allows him to repeat the exact same three-note figure many times without sounding tedious or predictable, as each time the motif repeats the strong down beat is in a different place.

Next page: a slide-guitar example

[Bars 1-4] Mick considers his approach to be exactly the same as regular fretted guitar, but with a slide effect and the odd two or three note chord inserted for good measure.

[Bars 5-8] The two main technical considerations here are the transition from the high 12th fret area to the open position, facilitated via the use of open strings, and once you're down there, the use of the slide to execute pull-offs exactly as you would with regular fretting technique. You need to be bold, direct and dynamic if you want to sound like Mick. His playing has authority so don't be afraid to really dig in.

[Bars 9-12] The real giveaway that Taylor sees things from a chord-tone perspective can be seen in our concluding four-bar phrase, specifically the final notes in both bars 10 and 11. We're targeting in this case the root of E, then the major 7th a semitone below, and then finally resolving back to the root, lovely! You can repeat this procedure with each and every chord-tone at any point within the harmonic sequence. This is an incredibly simple but highly effective melodic device.