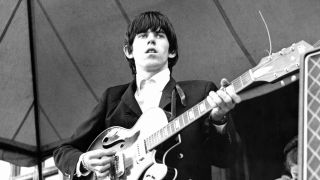 GUITARS AND AMPS EXPO 2014: Riffs are the backbone of rock guitar music. They're the nifty musical devices that are responsible for fish-hooking you into a tune and can lift a song's status into iconic territory.

Whether they last for just a single bar, like Bon Jovi's Livin' On A Prayer and Guns N' Roses' Sweet Child O' Mine, or they hold on for two bars or more (think Deep Purple's Smoke On The Water and Blur's Song 2), riffs are characteristically powerful. Unless you choose to impose them, they have no limits either - why not stretch to four bars? It worked for The Darkness on I Believe In A Thing Called Love and AC/DC's Highway To Hell.

In order to get your riff-writing juices flowing, you'll need to do some groundwork, which is where this feature comes in. During this lesson, you will learn the basic scales and chords that will help you construct your own riffs.

Once you've got these safely in your arsenal, we'll take you through how you can develop short riffs into longer musical ideas, leaving you well equipped to set about writing your own riff-laden songs.

One of the most popular (and easiest) scales to create riffs with is the minor pentatonic scale. Everyone from Jimi Hendrix and Eric Clapton, through to modern masters like Alex Turner and Jack White have used it.

Example one shows two patterns of the E minor pentatonic scale. The first pattern of the scale is the most common so learn it off by heart. While the second scale pattern is less common, it's used a lot in rock and metal music and you can develop it right up to the top end of the fretboard to create more dynamic riffs and licks. This means you will have more scope for using bends, slides and vibrato - all the elements that add character to your riffs.

Example two shows a riff that uses the second pattern of the E minor pentatonic scale. On your first go, play the riff without the slides or vibrato. Now add them into the riff and you'll be able to hear just how much these techniques add to a riff's effectiveness.

Another common device, particularly used in blues, is to take a riff and move the fretboard pattern to another starting note. Example three shows a simple minor pentatonic riff that moves to follow an eight-bar blues pattern.

Play through the two positions of the scale to get used to its different sounds, but quickly start to experiment with your own riffs. You can play the notes in any order you choose - if it sounds good, then it is good!

Play the first note with your first finger and slide into the third note with your third finger. Don't pay too much attention to the slide from the final note - this will happen naturally as you move to start the riff again.

Aside from bar five, each riff is in the same fretboard position but starts on different strings. The trickiest part is bar five where the riff starts on a fretted B note and has no open strings to help you. Play the whole bar with either your first and third or your first and fourth fingers.

Powerchords are an essential tool for riff writing. The master of metal riffage, Tony Iommi, has relied heavily on the humble powerchord throughout his career, as has Green Day's Billie Joe Armstrong.

Example four shows you all the powerchords in the key of E minor. Example five is an E minor powerchord riff to show you how you might use them. Try writing your own riffs by using different combinations of these chords and play them in different rhythms.

Don't be afraid of getting it 'wrong'; it's a case of practice makes perfect. Spend a while experimenting and in less time than you think you'll be writing riffs you like the sound of.

This example maps out all the powerchord options on the fifth and sixth strings. It's a good idea to start with an E5 chord, and from there you can use whichever chords you think sound good.

This two-bar riff is fairly easy to play, but make sure you mute the guitar with your picking hand after each of the powerchords to keep the sound tight and clean. These silences are indicated in the notation with rest symbols.

One of the most popular types of riff is the '3+1'. The 3+1 is often associated with Metallica and has been emulated by countless other bands including Killswitch Engage, Bullet For My Valentine, and Avenged Sevenfold.

A one-bar riff is repeated (yep, you guessed it) three times and then the fourth bar is a new phrase that nicely rounds off the riff ready for a repeat. The finest example of this type of riff is Metallica's Enter Sandman. Try using combinations of examples one and four to create your own 3+1 riffs as we have done in example six.

Bar one is repeated three times and then in bar four there's a variation on the theme, rounding off the riff. Play the opening note in bar one with your second finger so that you can reach down to the second fret with your first finger.