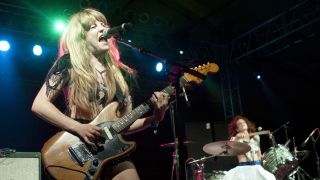 Until recently, playing in a two-piece evoked looks of bewilderment, but increasingly, duos are taking over the guitar world: just look at the success of our Jack White and Dan Auerbach, not to mention recent number one act Royal Blood. What these bands have in common is their refusal to compromise - they don't treat their line-up as some kind of hindrance.

Instead, they use their setup to their advantage, stripping songs back to their core elements and rocking the hell out. Don't get us wrong, there are downsides to only sharing the stage with a drummer - for one, the banter will be less sophisticated - but there's no reason your sound should suffer.

Through creative use of gear, playing style and songwriting, your duo could be as big as any four-piece rock band, and without adding two extra members along the way. Read on as we explain how to grab a two-piece of the action...

Think about your sound

Before you plug in, decide what you want from your band. Are you into trashy bass-less garage-rock like The White Stripes or early Black Keys, or do you crave something heavier and more layered?

Your overall vibe plays an important role in shaping your gear choices; if you want to sound like a three-piece, you need enough pedals and amps to trick the audience's ears into thinking you are.

Either way, prepare yourself for some serious work: as the only melodic instrument in the band, it's up to you to provide both rhythm and lead - no pressure!

Four things to think about

With only two of you on stage, it could look a little lonely up there, so plan how you're going to perform: try spreading out à la early Black Keys gigs, or feed off each other's energy and rock out.

Can't replicate the overdubs from your recordings? It might be time for a looper. Whatever model you choose, make sure your drummer can hear your loops - go out of time, and the whole song could fall apart.

Don't be afraid to use recorded tracks for bass and extra instruments. Your drummer will need to work to a click track, which could limit your ability to improvise, but you're guaranteed a full sound.

Fuzz is the natural ally of the two-piece, thanks to its suitability for both guitar and bass. Use it wisely, though; a relentless onslaught of full-on dirt can be fatiguing, so experiment with different drives for your guitar and 'bass' sounds.

Fewer band members can mean only one thing: more amps. Dan Auerbach forces his roadie to cart three huge rigs around, while Japandroids frontman Brian King employs no fewer than five on stage. Careful setting of each amp's EQ enables it to fill out the frequencies you lose from an absent bass player, but you'll need a serious signal splitter to run more than two at once (TG241 has more on using multiple amps together). Don't ignore bass amps, either; employing even a small bass combo can help to round out your low-end, especially if you're running a parallel effects rig - let us explain...

No bassist, no problem. A few choice stompboxes can sort out your bottom-end bothers: the first step is to split your signal using an ABY footswitch, or any stompbox with a stereo output.

Next, grab an octave pedal or pitch-shifter - ideally one with polyphonic tracking - and crank up the one-octave down mix, then run one output of the ABY switcher into the octave pedal. Now, send the other ABY output to a guitar amp and hook the pitch-shifter up to a bass amp (or bass DI to the PA), and there you have it: instant bass.

Play to your strengths

The danger with playing guitar and bass at once is that octave-down chords can sound a little... strange. Fortunately, with so much power behind you, single-note riffs take on a new lease of life, and are likely to form the bulk of your playing.

Meaty powerchords also work a treat, and don't be afraid to venture above the 12th fret, either: the lower-octave output will fill out anything you play at the dusty end, and makes it easy to weave melodies around riffs.

With only one other member in your band, it's crucial to work with your drummer. Respond to each other's playing dynamics and be sure to switch it up: take the 'bass' in and out, add or remove distortion, and play riffs in different octaves.

If you're struggling to fill out your sound or replicate overdubs in recordings, it could also be worth investing in a looper for further layers. Check out the video below for help with that…

'A and B' and 'A or B' outputs allow you to send and switch separate guitar and 'bass' signals to two amps.

If you need to perform several guitar/bass parts at once, a looper is a good investment - the RC-30 features two stereo tracks, plus dual inputs and outputs.

3 tips from the pros

"If anything, the limits increased our creativity, and we thought it was more interesting. I can't even play chords [on bass], so you've really got to use your imagination and weave riffs into songwriting. It's the weirdest way of being in a band, and to us, that's fun."

"I'm trying to create a guitar sound where it doesn't sound like anything is obviously missing. I have one signal coming out of my guitar and going into multiple amplifiers, each one playing a different role: there's everything from the low bass end right up to the high clean end and a bunch of distorted channels in between."