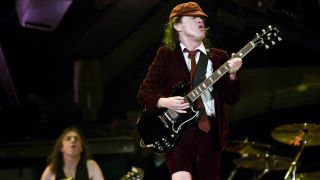 Angus and Malcolm Young are straight-ahead, no frills rock 'n' roll guitarists, and their style is the product of listening to classic blues guitarists such as Freddie King, Jimi Hendrix and Chuck Berry in their formative years.

The first piece of tab is a classic blues-based rock 'n' roll riff, akin to such songs as The Jack, while the trademark open-chord riffing in example 4 is inspired by songs such as Back In Black and Highway To Hell. The secret to sounding like AD/DC is to play with aggression and fully committed strumming.

Examples 2 and 3 are more subdued, in the vein of the intro to You Shook Me All Night Long, while the final two examples highlight Angus's love for the blues and pentatonic scales in his lead style.

Practise each example slowly until the notes start to fall under your fingers naturally, before playing up to speed and turning up the volume on your amp.

Use downstrokes throughout this riff, except where there are legato slurs.

Keep the fourth string ringing as you alternate between G and D diads in bar 1.

Use your pick to play the low notes and your fingers for the high notes.

Use confident strumming to infuse these four open chord shapes with energy.

This E blues scale lick is played in the open position. Let the first string ring out during the final three notes.

13 reasons why AC/DC rock for guitarists