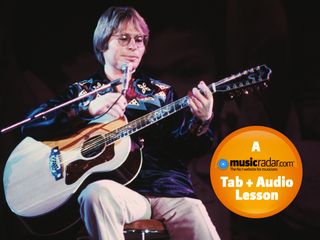 The late John Denver was one of the great American songwriters and acoustic guitar performers.

He penned classics that topped the pop charts and entered the public's consciousness, including Take Me Home Country Roads (covered by Olivia Newton John and Ray Charles), Annie's Song and perhaps his most covered number of all, the sadly prophetic Leaving On A Jet Plane, with which Peter Paul and Mary had a monster chart-topper.

Denver's pastoral style is reflected in his guitar playing, which is full of gently strummed chords and arpeggiated open chord patterns. As with many singer songwriters, Denver's guitar was primarily there to accompany his vocals so his guitar parts were always tasteful and suited to the song. He would often use short fills to make a chord sequence more interesting and also leave some space if strumming patterns got too busy.

[Bar 1] This sort of simple fingerpicking pattern should be in every player's repertoire; pay attention to timing, rhythm and clarity of notes…

[Bars 2, 10] The use of add9 and sus chords is very common in this kind of music; such subtle embellishments always add a different colour to proceedings, making things softer and not quite as predictable as straight major chords…

[Bar 9] When going from basic fingerpicking into strumming, keep the pick curled up in your hand. It's a good skill to work on and also means that you don't have to stand like a chump with a pick sticking out of your mouth!

[Bar 14] This is just a simple C chord but notice how the G on the third fret, first string subtly changes the sound…

[Bar 17] Back into strumming - how are you doing with shifting from fingerstyle to pick playing?

[Bar 24] Sometimes rather than play a chord, guitarists will create a short fill like this one using sixth intervals (very sweet sounding) that 'spells out' the sound of the chord but also adds a bit of variety. It's worth having a number of these worked out in all your favourite keys.

[Bar 29] Here is an ending worth having in your arsenal - look out for the sliding chords on beat two, as it's a great effect to be able to pull off.