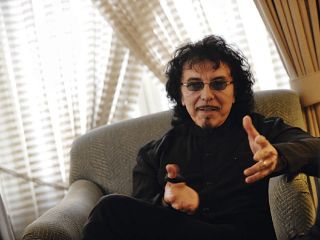 Guitarist Tony Iommi has issued a statement thanking his fans for their messages of support following his recent cancer diagnosis.

The 'Sabbath legend seems to be remaining upbeat and in his short announcement even jokes that "it's not what I wanted for Christmas, that's for sure."

Read the full statement below.

My fans, friends & colleagues - I just want to say how overwhelmed I am with all your messages of support, thank you so much.
Well it's not what I wanted for Christmas, that's for sure, but now I can't wait for the test results to come in and get going with the treatment. It's really good that the guys are coming over so that we can continue working on the album as things are going great in the studio. Well, not much else to say at this time, so thanks again.
Bless you all, Tony

In related news, rumours have been circulating that Black Sabbath had to cancel a planned (but unannounced) appearance at US festival Coachella due to Iommi's health.

It's still not clear what impact the guitarist's treatment will have on the scheduled Black Sabbath reunion dates, including June's Download festival.