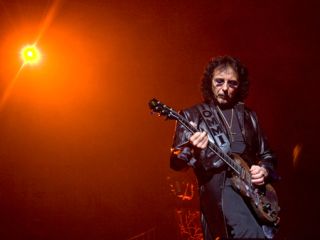 A statement posted on the Black Sabbath Facebook page has revealed that Tony Iommi has been diagnosed with lymphoma - a cancer which affects certain immune system cells.

The guitarist's illness was revealed on the official fan page at about 2pm today in a statement that read:

"With the news that Black Sabbath's Tony Iommi has been diagnosed with the early stages of lymphoma, his bandmates would like everyone to send positive vibes to the guitarist at this time. Iommi is currently working with his doctors to establish the best treatment plan - the "IRON MAN" of Rock & Roll remains upbeat and determined to make a full and successful recovery."

It's not yet known how Iommi's illness will impact on 'Sabbath's reunion plans, including their set at this summer's Download festival.