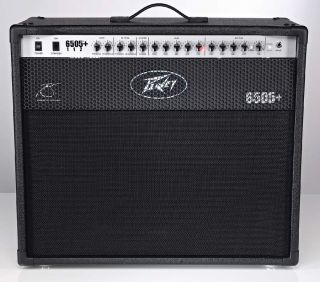 Every month TG's Rocked & Rated section brings you a choice selection of the coolest new guitars, amps and pedals... And then reviews the crap out of them. Here's what you'll find in TG205 (more info here).

Experience bowel-trembling metal tones as Peavey re-sizes its iconic amp as an affordable 1x12 combo (pictured). Hear the Peavey 6505 Plus Combo in action.

What happens if you lock Dream Theater's John Petrucci, Opeth's Mikael Akerfeldt, Dragonforce's Herman Li and Jerry Cantrell from Alice in Chains in a room together? We were too scared to try it for real, so instead we gathered their respective Sterling, PRS, Ibanez and G&L signature models. Which one's left standing? Find out in TG205!

While you're here though, you might as well check out our 'First Looks' at the G&L Tribute Rampage Jerry Cantrell signature and the PRS SE Mikael Akerfeldt.

You can't ride around on your tech's shoulders if you're tethered to an amp with a cable, so we test out Line 6's entry-level wireless system.

Slick features and a range of tones help to create Vox's post-modern range of new guitars. Check out our 'First Look' at the Vox Virage Series 33 Double Cutaway.

Randall adds budget all-valve tone to its catalogue with the new RT Series. We've got the first review right here.

Want to know what else is in the issue? Head here: Total Guitar issue 205