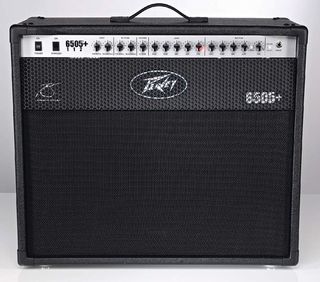 Peavey's 6505 series amp heads have become a metal staple, and now the manufacturer has released its gain-filled icon as a 1x12 combo.

Our demo starts with three tracks. Panned to the left is a clean part that was played using a Fender Classic Players 60s Stratocaster through the combo's Clean channel. In the right channel is the same part played using the Clean channel in crunch mode with an EMG 81/85-equipped LTD H351NT. Finally, the sparsely picked part has more gain and mid range, and uses the bridge EMG 81 of the LTD. We also added some of the amp's built-in reverb here, set to a medium level.

The second section was also recorded with three tracks using the LTD. The right channel uses the neck EMG 85 with the combo in Crunch mode and the gain set between 8 and 9. The EQ was left relatively flat, with a slight cut in the mids and boost to the low end. The left channel uses the bridge EMG81 through the combo's Lead channel with the gain set at 6. Here we cut the mids slightly, and added some extra presence for a more cutting tone. Finally, the lead part is played through the same lead channel with a boosted mid range and the gain set to 8.

All of tracks were recorded in Apple Logic Express 9 using a Shure SM57, direct into a Focusrite PRO40 interface. The bass track was programmed in Logic using EXS24's bass patch, and the drums were programmed using use Steven Slate Drums Dry Metal Kit.