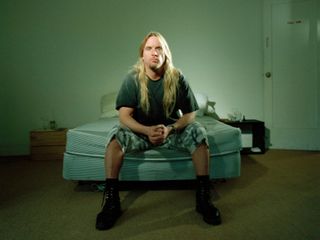 Slayer guitarist Jeff Hanneman has been forced to pull out of some of the band's forthcoming tour dates due to an arm infection.

The guitarist has been diagnosed with a flesh-eating disease known as necrotizing fasciitis, that destroys tissue and is thought, in this case, to have been caused by a spider bite.

Kerry King told press: "After everything that's happened we all agreed that we just can't let our fans down again. Jeff [Hanneman] is totally onboard with the decision, so we will tour as planned. We can't pinpoint what day he'll be back, but it will be as soon as he possibly can. We can't wait for him to get better and get his ass back on the road."

In the meantime it's believed that Slayer will recruit a temporary replacement to allow them to fulfil touring commitments until Hanneman is deemed fit enough to return to the live arena. It's not yet clear how long Hanneman will be out of action, or whether he'll return

Slayer guitarist Kerry King features in Total Guitar's greatest metal guitarist poll - click on the link to view the nominees and find out how to cast your vote.