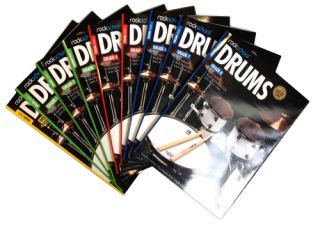 Rhythm has teamed up with Rockschool, the leading accredited provider of rock and pop exams worldwide, to bring you a fantastic prize of two full sets of nine Rockschool grade books for drums.

Tens of thousands of students every year take Rockschool exams and on the 1st May 2012, Rockschool launched the eagerly awaited new Syllabus for guitar. Building on the global success of its current exams, Rockschool talked to students and teachers, listened to what they had to say and used their comments as a guide to develop the all-new fourth Syllabus. The new material for the exams features Jason Bowld who has worked with Pitchshifter, Bullet For My Valentine, This is Menace, Funeral For A Friend and session great percussionist Nir Z whose credits include Genesis, Chris Cornell and John Mayer to name a few!

The new 2012 Syllabus represents a milestone in the development of Rockschool's graded exams, making them more accessible, more appealing and more straightforward to learn. Their books provide easy- to-follow guides and include commercial quality recordings that deliver the best production values and tracks to learn and play along to. The tracks were recorded at the Genesis studios, The Farm, using top producer Nick Davis (Genesis, XTC, Deep Purple, Bjork) and featuring world-class musicians such as Jason Bowld, Peter Huntingdon (occasional drummer with the Who), sound designer and hip-hop drum specialist, Neel Dhorajiwala whose film credits include the smash hit Mamma Mia! and Drumsense's Colin Wollway .

Rhythm has two full sets of the Drum graded exam books, from Debut through to Grade 8 as prizes for this competition. Each set of books is worth £129.

To enter visit our Rockschool competition page and answer a simple question.