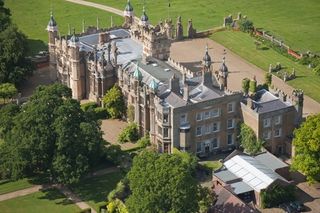 This weekend tens of thousands of rockers and metalheads will descend on Knebworth for the UK's second annual Sonisphere. Why are they doing so? To rock of course. And we all know to do that you need a beastly drum beat. So, we've compiled our pick of the beats that will get Knebworth on its collective feet...

A true Mötley classic, if this million-miles-a-minute beat doesn't get Knebworth rockin' then something is majorly awry. The double bass is thumping and thankfully Tommy still plays this one with every ounce of intensity that made the 1981 original such a fan favourite.

Iron Maiden - 'The Number Of The Beast'

If you're talking about bands that are going to rock Sonisphere you have to mention Maiden. But, the mighty Irons have been belting out sets heavy on new material of late, leaving no room for metal anthems like 'Run To The Hills' and 'The Trooper'. Luckily, they've got decades of awesome tracks to draw a sizable set from, so we can settle with Nicko smashing all hell out of the kit as the rejuvenated Maiden belt out 'The Number Of The Beast'.

Alice In Chains - 'Dam That River'

Just 12 short months ago Alice In Chains ripped Knebworth apart with a face-melting set, the lynchpin of which was sticksman Sean Kinney. A year on they're back (having released the awesome audio example of triumph over adversity that is Black Gives Way To Blue) and we can see no reason why 'Dam That River' won't shake Sonisphere to it's very core once again.

Pyro. Exploding babies. A flamethrower-wielding frontman. Yes, it's fair to say that Rammstein will absolutely own Knebworth for their headlining set on Saturday night. Here at Rhythm we're particularly looking forward to Christoph Schneider laying down the hard and heavy 'Feuer Frei!' We'll be staying well away from the dude with the flamethrower though.

An old school classic from the king of thrash. Here Slayer's Dave Lombardo proves why he's worthy of such a title with some mind-blowing double bass work towards the tail end of an absolute metal anthem. This won't just rock Knebworth, it'll knock it clean on the floor and kick it while it's down.