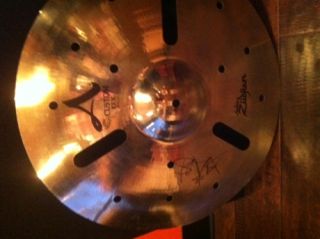 Mike Dolbear is running a marathon this May to raise cash for the Teenage Cancer Trust, and by sponsoring him you could win a signed Travis Barker cymbal.

The drum teacher is running the Halstead and Essex Marathon on 13 May in honour of young drummer Jordan Terris who tragically lost his battle with cancer in 2007 aged just 15.

Mike said: "After watching the Teenage Cancer Trust film at the event I wanted to try and do more to help a charity that does such important work. I ran the marathon in Jordan's honour last May and people were very generous with their sponsorship, donating over £1,800. This year I hope to raise even more money for the charity. Travis kindly offered me the cymbal, which he has used with his kit, when I told him that Jordan had been a huge fan. It is a very fitting prize".

To do your bit, and stand a chance of winning the signed Zildjian EFX cymbal, head here and sponsor Mike.