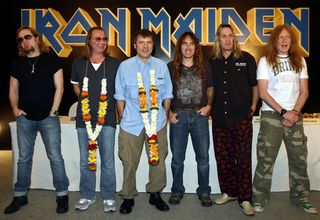 Ever fancied getting you hands on Nicko McBrain's drum kit? Yes, so have we, but we're having to settle for the next best thing, saving the Iron Maiden drum behemoth's gear from destruction.

Confused? Thought so. Let us explain.

Maiden have released an online game in which they're on the way to play their first-ever intergalactic gig. But, on the way they come under fire and their ship is destroyed, spewing their gear spacewards. This would never have happened if Bruce Dickinson had been at the flight controls.

Here's where you come in. Playing as Eddie you must rescue the gear and save the day (and the gig) in the process.

Have a go for yourself here. We're still playing through in the hope that they'll be some kind of Nicko vs Eddie face-off at the end. We live in hope.