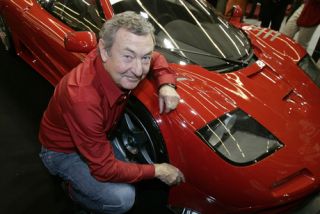 Hold on to your hats because Nick Mason has hinted that Pink Floyd could reform for a live return. Don't get carried away just yet though, as the sticksman told Sky News Radio that the band would only reunite for the right reasons.

When asked whether the band are hounded with reunion offers, Mason replied: "Yes, but I don't think we're really ready for that."

Referring to the band's last performance, which came at the mega charity Live 8 concert, the drum legend added: "It might be better if we kept it for something to be used for good. That would be a nice way to finish Pink Floyd's existence."

He went on to suggest that the Floyd could return with a stripped down show, before adding that a full tour would more than likely follow in the footsteps of the band's previous mind-blowing stage shows.

"It would still be really interesting to do a Pink Floyd unplugged, maybe. I think there's different things one could do that no one's done before. But I think in principle if we go out we should do it properly with all the bells and whistles."

For more from Mason and Pink Floyd, pick up the latest issue of Rhythm.