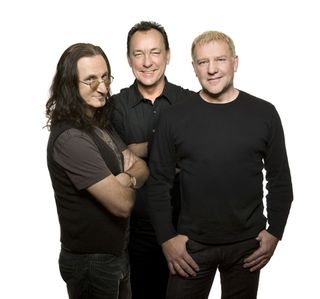 Yes, you read that right. Neil Peart, Geddy Lee and Alex Lifeson will be bringing their Time Machine Tour to the UK next year!

The 3.5 hour Time Machine Tour will hit Glasgow, Sheffield, Manchester, Newcastle, Birmingham and London in May. This is a rare chance to see Neil Peart (who recently came fourth in our poll to crown the greatest drummer of the last 25 years) in the flesh.

The Time Machine tour comprises an evening with Rush, where they will perform their classics, give a taste of the future and will - for the first time ever in the UK - feature the Moving Pictures album live in its entirety.

"Moving Pictures is our most popular album and it's the one that seems to have passed the test of time most gracefully," observes singer/bassist Geddy lee. "We're playing better than ever, and I'm not sure we're quite ready to put that tour away," he adds.

Released in 1981, Moving Pictures is the band's most successful album, certified 4x Platinum and features some of Rush's most well known songs and perennial radio favourites such as 'Tom Sawyer', 'Limelight' and the Grammy-nominated instrumental 'YYZ'.

Rush is currently working on their 20th studio album, Clockwork Angels, with producer Nick Raskulinecz (co-producer from 2007's Snakes & Arrows). The band has released two new songs from the forthcoming album, 'BU2B' and 'Caravan (parts I and II from Clockwork Angels) which are featured live in the Time Machine Tour setlist.

Tickets for the tour will go on sale at 9am on Friday 26 November.