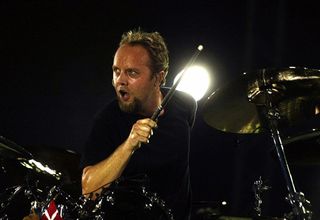 Lars Ulrich has spoken about the amount of praise still being heaped on Metallica's Death Magnetic album.

'Tallica turned in what many consider their best effort for many a year with the 2008 long player, and Lars is understandably chuffed that it continues to garner acclaim.

He told the Triple J radio show: "I'm hard-pressed to think of a Metallica record that has lasted as long in the positive department. Death Magnetic's had a good lifespan.

"We finished it about two and a half years ago. I cranked a couple of songs in my car when I was home last time — a couple, three, four songs — and it still sounds... I mean, it's got great energy, it's really in your face, and it's kind of just nutty and lively and cool."

What do you think of Death Magnetic? Is it a modern day metal masterpiece? Or do you still pine for Master Of Puppets et al?