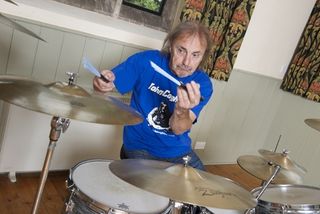 John Coghlan is to tour as part of a reunited Status Quo line-up in 2013.

The Quo will take a Rick Parfitt, Francis Rossi, Alan Lancaster and John Coghlan line-up on a five-date UK tour in March.

The tour starts in Glasgow on 10 March before heading to Manchester and Wolverhampton and ending with two nights at London's Hammersmith Apollo.

Pick up the latest issue of Rhythm and you'll find a five-page interview with Coghlan as he talks Quo, Buddy Rich and being the king of the shuffle.