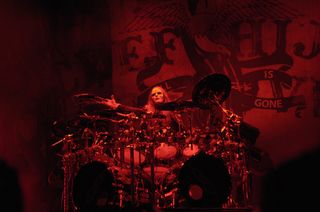 He may have just been crowned as the greatest drummer of the last 25 years, but Joey Jordison is showing little signs of hanging up his sticks.

The Slipknot tub thumper has told DesMoinesRegister.com that the Iowa metallers will return, despite the death of bassist Paul Gray earlier this year.

He said: "There will be another Slipknot record, of course.  "But, you know — there aren't any replacements. Everyone in the band plays bass and can play guitar. We'll get to that point when we get there. But I want everyone to know — and all my Slipknot fans and all my Iowa fans to know — that no matter what I'm doing right now with [Rob] Zombie and Murderdolls, that Slipknot will return.  "But we're still dealing with the passing of Paul, God rest his soul. ... Paul would never want us to not make another Slipknot record."

For more from Joey pick up the latest issue of Rhythm.