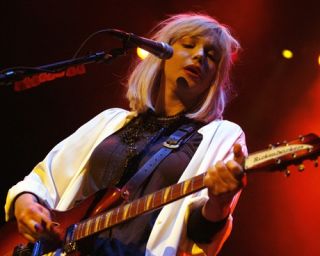 A few months back we told you that former Hole drummer Patty Schemel was looking for financial backing to help finish a movie documenting her time in the band. Well, it seems someone put their hand in their pocket because the documentary is done, dusted and ready for public consumption.

Not only that, but it seems the movie's premiere could reunite Schemel with her former bandmates for the first time in over a decade.

On the thought of meeting up with Courtney Love and co, Patty told Billboard.com: …It's a little stressful I guess. I haven't seen everyone all together in 13 years. I've seen everyone individually, but not all together. It'll be exciting."

According to Schemel the film centres on her time in the band and also her drug addiction. She has now been clean since 2005.

Patty added: "This is my perspective, which is different than, I guess, what the world sees or what the world was allowed to see. This is my private view of what I went through... and over the years, as I got clean, I've discovered that I'm not just Patty who plays drums in Hole or was in Hole. The cleaner and more focused I became, the more I discovered things about myself and that it wasn't all about the identity of being that drummer in Hole."

On the chance that meeting up with Courtney and co could lead to a reunion, Patty had this to say: "Nothing has been discussed, but I have a feeling... Who knows."