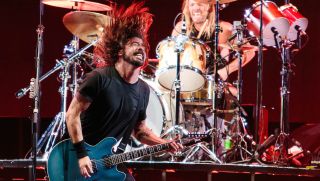 Just in case you've been living under a rock for the last couple of weeks, earlier this month Dave Grohl took an almighty tumble during a Foo Fighters show, breaking his leg and curtailing the band's European tour in the process.

The fall also meant that the Foos had to cancel their headlining slot at this weekend's Glastonbury festival. So, to offer some light relief to all of those devastated Foos fans out there, we've rounded up some of our favourite Dave and Taylor Hawkins moments from down their hard rocking' career for your enjoyment.

Where it all began. The end of Nirvana could have marked the end of Dave's time in the musical limelight, but he had other ideas. Armed with a blistering array of material, he recorded 12 of the dozens of tracks he had written over the years - the result was the Foo Fighters' superb self-titled debut album.

I'll Stick Around, one of the heavier, rawer tracks from the album, encapsulates the Grohl sound perfectly. Right from the scattergun fill that kicks the song off through to the pre-chorus rolls and crash-heavy outro, this is classic Grohl.

Not only is Everlong widely regarded as one of the best Foo Fighters songs ever put to disc, it's also got a killer drum beat.

It's bags of fun to play, but step out of line for a second and you'll be lost forever. Taylor may be the man at the kit in this video, but it was Dave who nailed the studio version.

Ok, this one's a bit of a cheat, given that it's not a Foos song, but, try telling Dave and Taylor that being joined by John Paul Jones and Jimmy Page for a run through of Rock And Roll in front of a packed Wembley Stadium is anything other than career-defining. That Taylor Hawkins isn't too bad up at the front of the stage, either.

Sadly, the calls for a Foo Zeppelin tour never really got off the ground.

2002's One By One may have been a largely forgettable affair, but lead single All My Life remains a staple of the Foos live show and features some hard-as-hell playing, fantastic snare-crash punctuation and a suitably water-tight groove from Taylor.

After a couple of underwhelming efforts a big return to form was needed with the Foos' seventh studio outing - and boy did they deliver.

The rhythmically deceptive 'Rope' is a sure-fire highlight. Taylor's trademark tasty ride work stands out, and he even slips a drum solo into the middle of the bridge. Nice work.