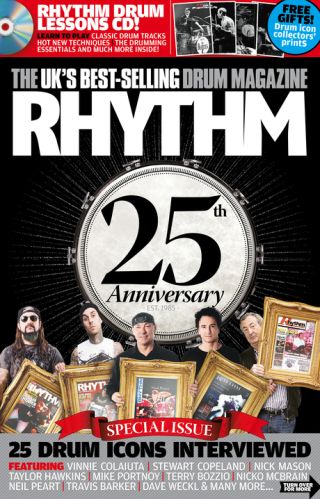 The special 25th anniversary issue of Rhythm is out now and it's packed full of features, lessons, reviews and a ton more. In fact, there's so much that to help get you started we've put together a list of five things you can learn from the issue…

How to win more than £10,000's worth of drum gear. To mark our anniversary we've put together a jaw-dropping list of prizes for a huge competition. You can bag a Carrera Drums kit, a set of Sabian cymbals, a DW snare, a signed Carmine Appice cymbal and a whole load more.

What Joey Jordison thinks of being named the Greatest Drummer of the Last 25 Years. The Slipknot man gives us his feelings on scooping more than 38,000 votes in our poll. Unsurprisingly, he's pretty pleased.

How to play tracks by Mountain, The Cult and Talking Heads on our cover disc. You can also find out how to play like Josh Freese and fusion master Tom Brechtlein and take a guest lesson from Fun Lovin' Criminals sticksman Frank Benbini.