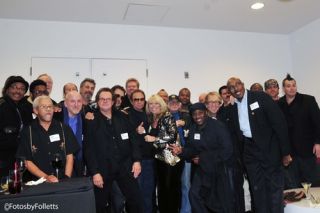 A special event was held on 21 November at The Grammy Museum in Los Angeles for the celebration of the one year anniversary of the wonderful book, Sticks 'n' Skins, which contains photos and bios of over 500 drummers.

The other purpose of the event was to honour legendary studio musician/drummer Hal Blaine, who was interviewed in the October issue of Rhythm. "It's really wonderful! It's so nice this book was finally done. It's a great book!" Hal told me enthusiastically as we spoke before the festivities.

The author, entertainment photographer Jules Follet, spent years capturing the 'headliner' but then challenged herself to shoot the drummer since they were usually in the back with poor lighting! From there, a seed was planted to put together the book. Then, she learned about photographer Lissa Wales and the endeavor became a spiritual project of passion with a purpose. Jules didn't know Lissa personally, but the further Jules went with the book project, the more Lissa's name kept coming up. Jules told me, "I was introduced to her work through Liberty DeVitto, who took me to my first NAMM show around three years ago. There I met Dom Famularo, who when I explained my project said, 'think Lissa Wales'. I had no idea who he was talking about and woke up at 6 am the next morning in a startle. I had been working on the book about six or seven months and it was too easy. It was divine intervention. Somebody 'up there' wants this done! I woke up and realised Lissa was my guardian angel". The book also serves as a tribute to Lissa, who sadly passed away in 2005.

Entertainment was provided by Don Randi (one of the original members of The Wrecking Crew) and his band. Several of the guest drummers sat in, playing hit songs that Hal had played on. Hal even sat in for the last two numbers which included Nancy Sinatra's song, 'Drummer Man'. Hal showed everyone he still had the chops that have graced over 6000 songs.

To learn more about the book and Lissa Wales, visit www.sticksnskins.com and www.drumpics.com

If you're wondering who appears in the main photo, here's the list of drum luminaries!