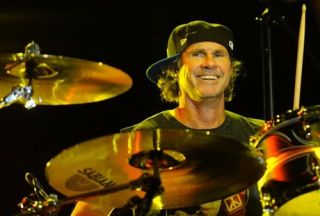 The will-he-won't-he leave Chickenfoot saga continues, with Chad Smith suggesting the 'Foot may not need look for a new drummer after all. All together now -hooray!

Chad told Ultimate-Guitar.com that he may be after to hit the studio with the supergroup.

When asked about rumours that his Chili Peppers commitments would keep him occupied for the foreseeable future and mean he couldn't continue with Chickenfoot, he said: "Sam [Sammy Hagar, Chickenfoot frontman] likes to talk. He was kind of frustrated. He knew all along that I was in another group. A little band from Hollywood — well, two bands — but one of them takes a lot of my time right now. So he was a little frustrated. But we played the other day and it was really fun.

"We had a great time again. So Joe [Satriani, guitarist] is doing his solo album tour, and I think he's starting now. In December or maybe two weeks in January, we're going to start up. I'll be done with my Chili Peppers stuff long before then. We'll go into the studio probably in the middle of January. That's the plan."

That's the kind of news we like to hear. Now how about some more UK Chickenfoot dates?