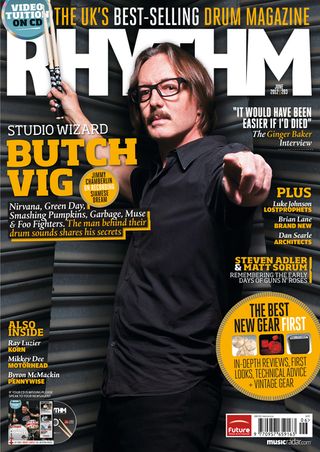 The June issue of Rhythm has drummer-cum-super-producer Butch Vig on the cover, and to honour that very fact we've taken a look at The Garbage man's finest work.

A life-changing record all round. Not only did it turn Nirvana into the hottest property on the planet, it also made Butch the most sought-after producer out there.

After working with the Pumpkins on 1991's Gish, Butch returned for the hugely-acclaimed follow-up. Check out Jimmy Chamberlin's glowing report in our June issue.

Getting out of the production room and behind the kit, Butch formed alt/electro rockers Garbage, a band that would go on to shift more than 17 million albums.

As Green Day continued their transition from snot-nosed punks to the biggest stadium rock band in the world, it should come as no surprise that Butch was at the helm.

Butch and Grohl back in the production booth together (in the latter's garage), this was always going to be awesome, right? In our huge cover feature Butch had this to say about Taylor Hawkins' solo on 'Rope': "I've always got in the back of my head that it needs to work for the song. That's not to say you can't have moments the drums jump out and get to shine on their own. I mean like 'Rope', who does a drum solo in the middle of a bridge these days?! Not too many people! That was a really fun moment. To me that song was totally cool and allowed to have those drum fills."

For lots more from Butch pick up the June issue of Rhythm.