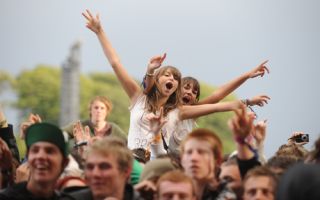 Despite the frankly dreadful weather, the summer isn't over just yet, not until the final beats have been played at Reading and Leeds this weekend, anyway. In honour of the three-day drumming feast that is about to begin, we've taken a look at the beats that will get Reading and Leeds on their feet.

No surprises with this one. Reading and Leeds will go absolutely mental as Frank Ferrer kicks off the hi-hat/crash-laden intro of 'Welcome To The Jungle'. Let's just hope it all gets started on the right side of midnight this time, unlike the last time Axl and co took top billing at Leeds. How effective this week's warning from the local council about any tardiness will be remains to be seen. We're guessing probably not that effective.

The return of Blink and this month's Rhythm cover star Travis Barker is of course a major draw at this year's Reading and Leeds. The punk pop trio have been opening recent shows with 'Dumpweed', which we think (thanks to it's array of fills and lightening-fast stick work) will get things off to the best possible start.

Limp Bizkit are enjoying something of a resurgence after years in the terminally un-cool wilderness, in fact John Otto and the boys have almost become festival staples in the last year or two after storming performances at Sonisphere and Download. This year it's Reading and Leeds and excitement at both sites is sure to reach fever pitch as Otto blasts his way through the anger-fuelled 'Break Stuff'.

Time signature changes may not be a sure-fire way to get a festival crowd on its feet, but Biffy Clyro needn't worry, as 'That Golden Rule' is an absolute barnstormer of a track. Filled with Ben Johnston's inventive drumming, the Scot trio's set could well be one of the highlights of the whole weekend.

Yet another comeback appearance at this year's Reading and Leeds, but this one is surely the most highly-anticipated. Gary Powell (who recently told us all about how the reunion came about) will be back at the drum stool for The Libs and we're hoping to hear 'Begging' from their smash debut album. Gary recently admitted to us that it's also one of his favourites, and were not surprised as he really gets to show off his chops.