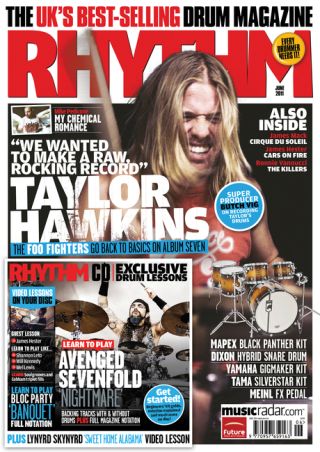 The brand new issue of Rhythm is out now and it's packed full of features, lessons, reviews and a ton more. In fact, there's so much that to help get you started we've put together a list of five things you can learn from the issue. Pick up the issue and you can learn...

Our huge Taylor Hawkins cover feature delves deep into the making of the hard-rocking, return to form that is Wasting Light. Taylor talks making the record in Dave Grohl's garage, cutting the whole thing to tape and more. We also get the inside word on the record from super producer Butch Vig and take a nose around Taylor's kit courtesy of his tech Yeti.

How to play tracks by Avenged Sevenfold, Bloc Party and Lynyrd Skynyrd

Thanks to our tuition disc you can unpick Portnoy's playing on 'Nightmare', nail indie anthem 'Banquet' by Bloc Party and master southern rock classic 'Sweet Home Alabama'. There's also a guest lesson from James Hester and a shedload more.

We speak to Ronnie Vannucci about his superb solo effort Big Talk and John-Fred Young on Black Stone Cherry's new record. We also quiz Ronnie on the return of The Killers.

How Mike Pedicone is taking stadium shows, intricate beats and death threats in his stride with MCR

The My Chemical Romance new boy tells us what it's like to be in the world's most screamed-at rock band. From sold out stadiums to death threats from 12-year-olds, Mike has seen it all.

Our verdict on all the latest CDs, DVDs and gear

This month we have CDs and DVDs from Black Stone Cherry, John Blackwell Project, AC/DC, Mastodon and more and gear from Mapex, Tama, Dixon, Yamaha and Techtonic ranked and rated.