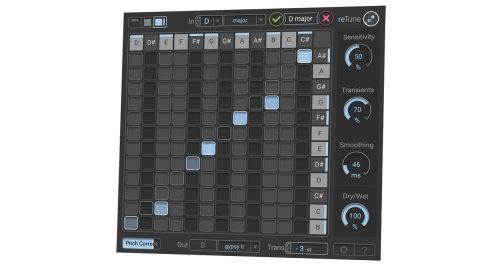 Nothing else offers such a range of pitch adjustment uses at such high quality and with such ease. It's terrific fun, too!

zplane's patented real-time pitchshifting and timestretching technology, élastique, has been licensed to some of the biggest names in the business (Ableton, Steinberg, Native Instruments, Avid and more), but while we now take the ability to repitch audio on the fly for granted, transforming the key of mixed polyphonic audio and transposing notes within it is a considerably trickier proposition.

At least, it was. Meet zplane's latest effect plugin, reTune, in VST, AU and AAX formats...

The layout is straightforward. The display is dominated by a 12x12 grid, with notes from C to B arranged horizontally along the top and vertically down the right-hand side. The horizontal axis represents incoming notes, while the vertical position sets the output notes.

First, you set the key for incoming audio (if you don't know it, there's an effective Learn function), whereupon reTune highlights the notes of that key at the top of the display. You can then use the plugin like a conventional pitch corrector, raising the Pitch Correct slider to nudge tunings to the nearest note.

It works better for instruments than vocals, or for tightening pitches within full loops before transposing, though it's not a full-on replacement for dedicated tuning software.

But here's the really powerful bit: set a target key at the bottom and reTune will automatically nudge notes in the audio that aren't in the target key - including polyphonic material and chords - to the nearest ones that are. There are 11 scales to choose from, and the root note of the output scale/key is set using the transpose up/down down buttons.

reTune maintains excellent audio quality at transpositions up to a whopping +/-24 semitones, and the grid also enables you to manually define which output note each input note is transposed to - all Ds transposed to the nearest F, for example.

Three controls tailor the tuning to different types of material. Sensitivity, in simple terms, sets a threshold for how loud notes have to be before they are targeted for repitching; Transients protects sharp attacks from transposition (and it can be dialled up to 150% to enhance transients even when no transposition is taking place); and Smoothing defines how quickly reTune moves from one pitch to another, particularly relevant to legato sounds and melisma. All controls - including the grid mapping - can be automated, except Scale type.

You can leave your hats on

reTune really does enable disparate musical material to be 're-keyed' with no noticeable drop in fidelity - but it's not perfect. When transposing full tracks with synthetic kick drums, for example, some degree of punch is lost. Most of the time, you probably won't be using it for that sort of thing anyway, but it's worth pointing out nonetheless.

reTune introduces a little latency, which is understandable but a bit frustrating for certain uses, and formant controls for vocal applications would be nice. Oddly, there are no Presets or any sort of reset button, for setting everything back to defaults, but zplane says it is considering adding these to a future version.

reTune has any number of valuable uses in the studio, from problem solving to time-saving to the outright creative, and we wouldn't be surprised to see it become as ubiquitous as zplane's famous élastique algorithms.