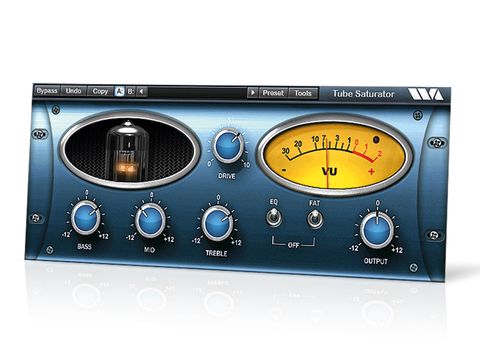 Although pretty basic to look at, plenty of thought has gone into Tube Saturator's features. First up, the Baxandall EQ has been used because it delivers natural-sounding high and low shelves that are more like gentle slopes than shelves, similar to the tone controls on a hi-fi. There's also a peaking mid band, which is broad and, again, sounds natural.

All frequencies are fixed (100Hz and 1kHz transition frequencies for the shelves and 800Hz centre for the peak) and the gain's range is +/-12dB. Also significant is that the EQ sits before the preamp, enabling it to influence which frequencies are driven.

With completely flat settings, we found that Tube Saturator had no discernible effect, but on cranking up the controls the interrelated nature of things became more apparent. Even with the Drive at zero, switching on the EQ circuit has a subtle effect on the low-end, thinning things out a little. The EQ itself is very pleasing and although the high and low shelves are great for sweetening, we were particularly impressed by the mid-range and its ability to musically boost or cut that often congested area around 800Hz.

Changes are subtle until you crank the Drive up to 4, beyond which there's more obvious even harmonic content. For held sounds, this is perceived as increased higher frequencies. For impulse sounds, such as kicks and snares, this starts out having an enhancing effect, but as you push things further, the saturation limits the peaks, eventually sounding slightly compressed.

"Even with the Drive at zero, switching on the EQ circuit has a subtle effect on the low-end, thinning things out a little."

Combining EQ and drive can be fun and although the EQ isn't of the parametric variety, we found it possible to sculpt individual sounds quite well. Finally, Tube Saturator is great for treating stereo sounds, such as drum busses and overall mixes, adding even harmonic enhancement and, if pushed, some limiting.

Wave Arts' prototype versions of Tube Saturator used typical emulation methods, effectively joining the individual processing functions required. However, this didn't properly represent the interrelatedness of the twin triode preamp design, which led the company to pursue component-level circuit simulation. This uses a set of non-linear differential equations to calculate specific node points in the circuit at each sampling period.

This is very CPU-intensive, and not only that, but the CPU hit is proportional to the number of nodes cubed, so a more complex circuit with twice as many nodes would equate to eight times the CPU hit!

We found that a mono instance of Tube Saturator running at 44.1kHz registered just under a third on the CPU meter for one core of an Intel Mac 3GHz CPU. However, using a stereo instance doubles that, and higher sampling frequencies will multiply it further, so remember that 'freeze' button!

Initially, we were a little sceptical of such a 'boutique', purist plug-in, but we'll admit to being won over by Tube Saturator's wonderful sound. It's ideal for a range of sound-sculpting and mastering jobs and the results demonstrate just how good analogue emulations can be using the circuit-modelling methodology. And if you have a powerful computer, the CPU hit isn't really so debilitating.

Our audio demo features Tube Saturator at work on:

1. Synth bass: gradually increasing drive to maximum, switch in fat mode then reduce drive back to zero. Next, EQ with high, mid and low bands gradual boost then cut. EQ and drive combined to produce a nice enhanced bass sound.