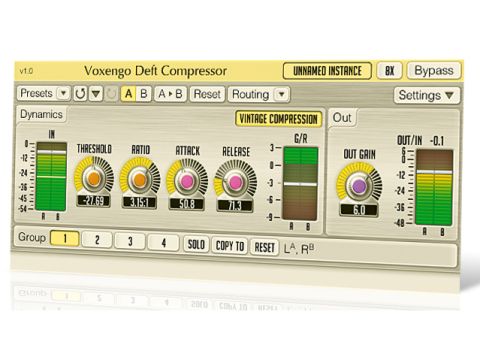 It's not a do-it-all compressor, but Deft is different enough to make it attractive as an addition to your dynamics toolbox.

Voxengo main man Aleksey Vaneev has been fortifying his plug-in empire for years now, presenting a selection of affordable but well thought-out and great-sounding processors. His latest is the Deft Compressor, and this time the emphasis is less on heavy colouration (like Crunchessor) or transparent mix glue (à la PolySquasher) and more about clean, fast bus/track compression.

Deft's controls are very simple: Threshold, Ratio, Attack and Release. Ratio goes up to 20:1, but three quarters of the dial covers ratios from 1:1 to 5:1 for greater accuracy in this region. Attack ranges from 0.1ms to 300ms, and Release from 1ms to 2s (note that there's no auto release option), so we're not talking super-fast 1176-style attack, though it's pretty swift on the release.

Makeup gain is automatic, and there's a manual output level as well. A Vintage Compression switch adds a small amount of saturation and, if you need more, you can also drive the output gain.

"The emphasis is on clean, fast bus/track compression."

Key to Deft Compressor is its novel S-curve approach to the attack and release stages. A compressor can have linear attack and release behaviour, but useful though this is, history has shown us that analogue compressors are highly desirable for their non-linear behaviour. Optical compressors are a good example, as they often exhibit slow initial attack, and there are plenty of other crazy designs out there, such as dbx's 'over easy' circuit or the famous UREI 1176's multi-stage release, to name just two.

Deft Compressor has an attack and release shape based on a sigmoid or 'S' curve. This results in a kind of three-stage behaviour with a slow onset accelerating to a mid-point, then decelerating towards the end. The idea is that this gives warm colouration without too much distortion in lower frequencies, and this is precisely what we found when putting Deft to use. You don't get such a sudden 'drop', and this seemingly helps reduce distortion, especially with faster release times.

One appealing feature of Voxengo plug-ins is their standardised interface and routing. This allows for flexible processing (M/S, 5.1 and dual mono) and you'll also find excellent speed and hold options for the metering, various global control settings (including mouse wheel precision), GUI colour options, and undo/redo with a history dropdown. For improved sonics, you've also got 1x, 2x, 4x and 8x oversampling options - you'll notice the CPU usage creep up as you increase these.

So how does it sound? Well, it's a game of two halves. You can set very short attack and release times and use Deft to punish kick and snare transients or create pumping compression on drum kit room mics. But in all honesty, there are probably better compressors for this task. You can also use Deft gently on transient-heavy sounds to add snap and punch - combined with the vintage mode, this can really fatten them up.

However, where Deft excels is in subtly handling high and low frequencies - particularly the latter. It's not that it's completely transparent, but we found it to be excellent on bass guitar, acoustic guitar, vocals and, to some degree, acoustic piano. It basically lets you 'bring up' these sounds when set to quick (though not the very quickest) release times, but without the associated distortion.

The results are slightly coloured, at times reminiscent of an optical compressor, but always musical. With wide-ranging release times, you need to be accurate with your settings, but the interface is easy to use and offers plenty of visual feedback.

Overall, Deft Compressor is an interesting concept not least because it isn't trying to mimic an existing compressor design. At $100, Voxengo is hardly giving it away, but if you're looking for an alternative tool that's musical and simple to use, it's worth taking this one for a test drive.

Listen to Deft Compressor at work:

2. Snare drum: using Deft to achieve a fatter snare sound. Reducing threshold and adjusting attack so it allows the transient through, then the release so it's fast but not too fast. Increasing the ratio and bypass to compare. Adding vintage mode. Bypass to compare.

3. Acoustic Bass: starting with low ratio of 1.5:1 and reducing threshold for compression. Increasing ratio slightly and modifying release to be quite fast (60ms). Adding gain with output level and bypass to compare.