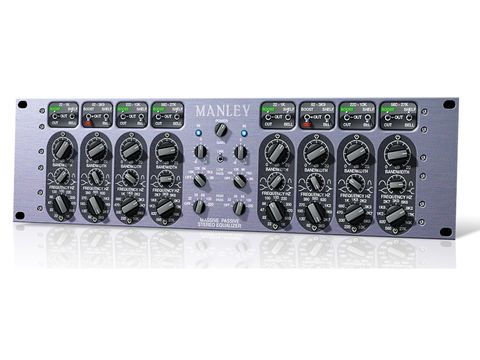 Perhaps the most impressive EQ yet from Universal Audio, albeit at the expense of a sizeable strain on your UAD-2 card.

Manley Labs does nothing by halves, and its Massive Passive (aka Massivo) is an amazing piece of engineering that takes a Pultec-style passive EQ as its starting point and runs with it.

The result is a stereo 4-band passive EQ (in a parallel configuration) with high- and low-pass filters, an all-valve gain make-up stage and transformer-balanced outputs.

Each band can be switched to cut or boost (20dB maximum in bell mode) and can work as either a bell or shelf - both can be modified using the bandwidth. Frequency selection is notched (11 frequencies per band), and there's considerable frequency overlap across bands. The parallel EQ design means that if you EQ the same or similar frequencies in two bands (for example), the gain doesn't 'double up'.

This brings us neatly to the bandwidth/gain interaction. In a typical 'constant bandwidth' EQ, gain levels may influence bandwidth, but not vice versa. With this unit, the bandwidth does affect the gain, and you'll only get the maximum 20dB gain when the bandwidth is at its narrowest. At its widest setting, gain will max out at 6dB (2dB for the 22Hz to 1kHz band).

In shelf mode, adjusting the bandwidth takes the slope from a typical shelf to a shape with a reverse bell around the frequency point (called a shelving overshoot). So, boosting in shelf mode with maximum bandwidth produces a marked bell dip (6dB) at the designated frequency.

As well as modelling the standard Massive Passive, Universal Audio has also included the Massive Passive Mastering Version as an extra plug-in. This hardware variation came about in response to demands for a more easily recallable and stereo-friendly unit. So, notched bandwidth and gain controls were added.

Just like the original, gain is dependent on bandwidth, so one notch is not a fixed amount of gain, but the notches do help in like-for-like recall situations.

So why the need for a software version? Well, Manley made some other changes. First up, the maximum gain was reduced to 11dB, allowing for more accurate settings. Next, the filters are at different frequencies (12, 16, 23, 30 and 39Hz high-pass; 15, 20, 27, 40 and 56kHz low-pass) and offer a slightly flatter shape up to the knee point. Finally, the master gain trims offer less gain overall (-2.5dB to +2.5dB) and are also properly detented in 0.5dB steps.

While we wouldn't call the Massive Passive surgical, it's still very powerful, particularly with narrow bandwidths. In use, we particularly liked the bell shape for boosting low and low-mid frequencies and combining these with the high-pass filter worked well on bass guitar and acoustic guitar. Similarly, for top end sparkle the bell shape delivers a classic Pultec-style lift.

What's most surprising is the shelf. The bandwidth control turns this from a gentle, broad enhancer to a more extreme beast altogether, and boosting with maximum bandwidth gives a big scoop with a steep shelf just above. This is great for adding 'air' when set to 16, 12 or even 8.2kHz, but the sharpness can be very obvious at lower frequencies.

In practical terms, there's plenty to commend. Firstly, the cut/boost design means you can seek out undesirable frequencies in 'boost' then simply flip the switch to 'cut' to remove them. Also, the band overlap means you can use two bands to create a smooth, broad lift or cut.

We compared UAD's emulation to the one in Focusrite's Liquid Mix version, called the Huge Tube. On a single band basis, they sound very similar, but the Liquid Mix lacks the parallel topology, so with two or more bands, the UAD behaves much more like the original hardware. Finally, it's worth saying that one stereo instance used 60% of our UAD-2 Solo card - certainly a consideration. And we did also experience some bass 'thuds' when using high gain and switching frequencies.

Overall, though, this is an excellent software version of a superb piece of hardware.

1. Acoustic piano: A blues piano part - first spinning through all frequencies in top band with bell shape, maximum boost and wide bandwidth. Then backing the other way with narrowest bandwidth. Settling on a broad bell boost at 5.6kHz. Then using a low shelf to boost at 270Hz. Raising the high-pass filter to various settings and picking 39Hz. Finally, boosting the mid range to spot the boxiness at 680Hz then cutting. Bypass to compare.

2. Acoustic guitar: Starting with a broad shelf boost then spinning through various settings. Then increasing the bandwidth setting to produce overshoot effect. Settling on 8.2kHz point. Next, using the low-pass filter to tame excess high frequencies - settling on 18kHz. Boosting with a broad bell in the low frequencies - settling on 82Hz. Using the lowest band to shelve off at 100Hz with a broad shelf. Finally, adding some bite in the mid range with a mid bandwidth at around 2.2kHz. Bypass to compare.