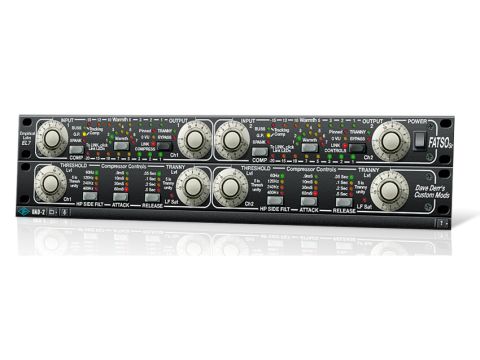 FATSO can bring something special to your mixes, although it shouldn't be mistaken for a workhorse compressor.

Empirical Labs' EL7 FATSO - Full Analogue Tape Simulator and Optimiser - is a 1U rack processor designed to reproduce the sonic characteristics of tape, transformers and valves. However, its transfer to the software domain has enabled UA (and original designer - EL's Dave Derr) to extend the capabilities, providing two plug-ins: FATSO Jr., which is a replica of the original unit, and an extended effort, FATSO Sr.

Things get more interesting with the Warmth section, which replicates the treble saturation of analogue tape, creating, amongst other things, momentary high-frequency reduction for transients. Tranny pursues the low frequency saturation of transformer input and output stages, adding mid-range clarity and helping bring out bass sounds where the fundamental frequency is inaudible (on small speakers, say).

Finally, FATSO Jr. has three compressor modes (Tracking, General Purpose and Bus) that can work in conjunction with the limiter mode (Spank), which can be used on its own, too. Each mode is basically a preset with fixed attack, release and ratio, and is heavily influenced by the classics emulated in EL's Distressor.

We found that FATSO Jr. acts just like the hardware. This even goes as far as the selection buttons (Comp, Warmth and Tranny) that cycle round their options with each push. Levels are adjusted against a fixed threshold using the input control. FATSO also exhibits interrelated behaviour, whereby input level/compression options affect clipping, harmonic generation and warmth. Here, we found the indicators for compression, warmth and distortion helpful.

So, what's FATSO Jr. good for? Unsurprisingly, fattening snares and adding low-mid punch to kicks proved successful. For that big, squashed room/overhead drum sound, there are plenty of options, including taming the cymbals with the warmth control. Note that each compressor has very distinctive behaviour.

Beyond this, we naturally drifted towards bass guitar, acoustic guitar and also piano, enjoying FATSO's ability to round out sounds by combining compression and saturation. We even stuck it across a whole mix to add glue and edge. However, we wouldn't recommend using it on too many sounds - each mono instance racked up 26% DSP of our UAD-2 Solo, so we were limited to a maximum of three mono instances.

FATSO Sr. loads with a 2U interface. The top half is the same as Jr., with the bottom half harbouring extra controls. There's compressor threshold with attack and release options, and a high-pass filter for the compressor sidechain.

When the threshold is set to 5, it's the same as FATSO Jr., and you cycle the other parameters round their values (four settings each) using the buttons. With no LEDs lit, they're effectively in bypass, so you just get the default values of the Jr. unit. You also get a Tranny Level knob (again, 5 is the same as the Jr.) and an LF saturation indicator LED.

These controls - and the attack/release in particular - make FATSO Sr. far more flexible and we found it capable of far more extreme results. Since it's basically the Jr. with under-the-hood controls exposed, the DSP hit is the same. In fact, we have to wonder why UA didn't just make one FATSO plug-in with the extra options in a fold-down panel.

Overall, you should buy FATSO for its sonic footprint (carefully transferred from a proven hardware unit) and its excellent custom upgrade, FATSO Sr. However, the hardware-style mode switching feels clumsy in the software domain, and having two versions (Jr. and Sr.) seems like an unnecessary gimmick.

Listen to both versions of FATSO in action:

1. Picked acoustic guitar: first running through the compressors - buss, general purpose, tracking and then the limiter. Next, removing compressors and driving the input itself so LED meter hits 'pinned'. Bypass to compare. Reducing input level a bit and adding 'tranny' option. Repeatedly bypassing to compare.

2. Snare drum: first running through the compressor options including combinations - bus, general purpose, tracking, spank, then spank combined with first three. Next, reset levels and clicking through the warmth settings from 1 to 7. Then choosing general-purpose compressor, and setting warmth to a mid point to show heavily fattened snare sound.

4. Kit overheads: cycling round a section with a crash, gradually increasing the warmth control to reduce the harshness. Bypass to compare. Notice how the snare transients also get tamed by the warmth effect.

1. Drum kit: full kit mix, switching in the compressor choosing general purpose preset then reducing threshold for deep compression. Next, switching in the attack and release options selecting slow attack and fast release for a big squashed sound. Finally, adding in the 'tranny' effect and pushing to the max using the Sr. 'tranny' level control. Bypass to compare.