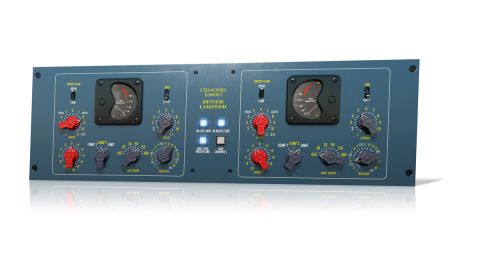 Universal Audio continues to deliver some of the best and most desirable emulations available and the Zener is as good as it gets.

New from Universal Audio, in collaboration with Softube, is the Chandler Zener Limiter.

If you're familiar with Chandler's real-life hardware unit, you'll appreciate that the Zener is an expanded version of their original Zener diode-based TG1 Limiter, and is thus based on the classic EMI TG console limiter, that rare breed of 1960s desks found at Abbey Road and other EMI establishments.

The Zener was born when Wade Goeke at Chandler increased flexibility of the TG1 by adding extra knob positions (there are 11 positions for Attack and 21 positions for Release), as well as including the settings of the original TG1 (labelled in white). These details are carried over in the software emulation, allowing you to replicate both the Zener and the TG1.

Additionally, there's a Side Chain high-pass filter with five stepped frequencies, two Input operating levels (High and Low, with a 6dB difference), needle-style Gain Reduction meters, three compression settings (Comp 1, Comp 2 and Limit), and THD, which removes the limiter threshold from the circuit so you can use the plugin solely for saturation.

Compression threshold is handled by the stepped Input control, and the post limiting Output control provides +/- 10dB gain in 1dB steps. Holding Shift gangs these together in an inverse configuration, which is handy. Further software-only extras include Linking of all controls, and Mid/Side processing.

Cream of the crop

The Zener is basically three compressor designs in one, with Limit and Comp 1 emulating the original TG limiter options, and Comp 2 a sort of hybrid of the two. This means that the Attack and Release settings are specific to each of the three modes. This becomes very apparent in use, with the Limit mode delivering very lively attack and release characteristics.

At its fastest settings, this adds obvious distortion to picked electric bass, and easily nails the transients on snares and kicks. But even at these extremes, there's still warmth to the sound that's very seductive, and easing back the attack and release settings just a little removes said distortion. For snappy snares, we favoured Comp 1 and Comp 2, with the latter delivering the more aggressive sound.

Comp 1 is the most universal setting, and can tackle everything from acoustic guitar to electric bass and drum overheads. Even so, in conjunction with the Side Chain high-pass filter, the more aggressive Limiter and Comp 2 settings can be used far more extensively, as you can prevent the low frequencies from dominating the compression. To that end, in conjunction with the high-pass filter, all three settings make reasonable bus or sub group processors.

One rather excellent feature on the Zener is called THD (total harmonic distortion). This removes the threshold from the circuitry leaving the remainder of the circuit active, and allows you to take advantage of the Zener's excellent saturation characteristics without compression or limiting.

You may have spotted that the Input labelling indicates a couple of THD values at 0.04% and 2%, but even greater distortion can be achieved by increasing the input level into the plugin.

From spectral analysis, it's clear the saturation is dominated by odd harmonics, adding a nice richness, and what you'll hear is subtle then more obvious mid- to high-frequency enhancement as you drive the circuit towards clipping. If you want the best of both worlds (and have the available DSP, of course) one nice option is to chain two Zeners in series, using one just for compression and one just for the THD feature.

All told, this is a rather fabulous emulation of a rather fabulous hardware unit, and aside from the steep asking price, and the metering limitations matching those of the original hardware, we really have no gripes.