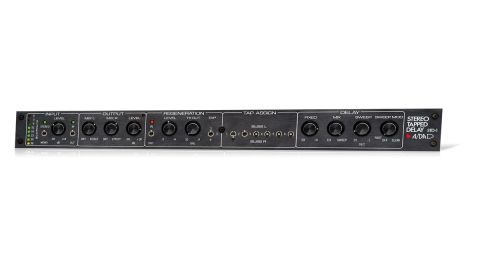 Certainly not your normal delay, this excellent (though niche) bucket brigade processor can add wonderful width and depth to sounds.

But despite the delay tag, this isn't your normal delay line... or even multitap delay! Rather, the purpose of STD-1 is to create short, multi-voiced, modulated delay effects - including doubling, chorus, ambience and short reverb.

Each tap can be sent to either the left or right output or bypassed completely. Delay feedback (Regeneration) can be sourced from taps 1, 3  or 6, and feedback Level is joined by a Hi Cut filter (900Hz to 10kHz). There's delay modulation onboard (Sweep), and the Delay section includes not only an overall Mix control to blend the modulated (Sweep) and non-modulated (Fix) signals, but also two connected LFOs, letting you use one to modulate the other.

At the Output stage, STD-1 includes a separate effects blend for each channel (Mix L and Mix R), followed by an overall Output level; you also get input Level control and Mono-ising switch. The settings toolbar has two further options: Regeneration Limiter and Noise. The first applies a soft-clip limiter to the feedback signal, and the second provides an adjustable noise floor (-inf to -60dB). Sounds like a very specific sonic prescription...

A key aspect of STD-1 is its capability for modulating signals. It can be used in subtle ways to great effect, of course, but starts to deliver some pretty interesting outcomes when you start pushing it to extremes.

For a new take on guitar vibrato, we used the two short delay taps combined with a slow Sweep setting and a fast Sweep Mod setting. Blended in with the non-modulated signal and dry input, this wobbly effect was far less uniform than traditional vibrato.

Next, for an underwater special effect that works on percussive sounds such as picked guitar, we set the Regeneration to almost maximum, sourced it from tap 6, and turned the Hi Cut down low. Using just the two longest taps (5 and 6) combined with fast Sweep and slow Sweep Mod settings, and monitoring just the Sweep effect, we created an almost talkbox-like effect. These effects are difficult to describe, so we advise you have a play for yourself!

STD-1 excels at adding subtle width and depth to sounds. For a processor with only a handful of controls (and only 30 presets), it can still offer a voyage of discovery.

With feedback and modulation turned off, moving between two, four and six taps increases the width of sounds nicely. Likewise, shifting the Delay multiplier from x1 to x5 further increases width - although when doing this, we found it vital to use the Mix control to blend in the original signal, to prevent the stereo image becoming dominated by the shortest delay.

With snares and kicks, we like using the Regeneration to add a dash of resonant thump to proceedings. For other source sounds, blending in just a touch of modulation enhances the depth of the effect in a natural way. Close slapbacks and ambience effects were straightforward to dial in using the longest taps. We love how this effect is designed with tweakers in mind, despite its minimal controls.

STD-1 is clearly an esoteric processor, but it still has a number of uses, and as a width enhancer alone, it can pull off some gorgeous, rich effects that you'll struggle to achieve in other ways. Overall, we highly recommend that you catch this excellent plugin - just be prepared to get in there and customise the settings!