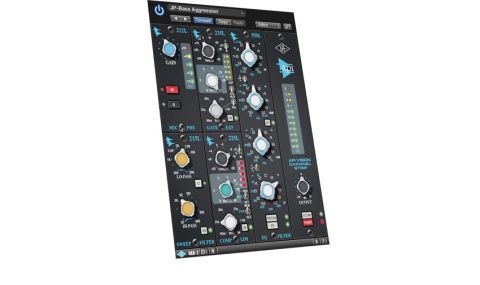 A faithful and versatile emulation. For UAD-based fans of the API sound it's party time.

While there are many manufacturers of hardware mixing consoles, some names seem to manage celebrity status more comprehensively than others. We've all drooled over pictures of large-format mixing desks and, more often than not, these seem to be SSL or Neve designs.

However, API mixing desks deserve to be mentioned in the same breath, not least as one was central to the Rumours album by Fleetwood Mac which has sold more than 45 million copies worldwide since its 1976 release.

UAD has already successfully modelled the channel strips from coveted SSL and Neve consoles and have also released '500 series' emulations of API gear this year. However, it's now gone further, with Version 7.3 of the software including a full channel strip emulation of the flagship API Vision console, which was released in 2003.

The 212L preamp stage of the plug-in is modelled after the API 2488 console, which became synonymous with the fabled 'LA sound' of the '60s and '70s. The main signature components of that desk design were the 2520 API op-amp and the transformer stage, the two combining to produce the rich warmth and creamy top end associated with API gear.

Within the plug-in, controls here offer a rotary Gain stage, with red 20dB pad and black phase invert buttons, with a ladder LED providing level monitoring, including a +18dB clip light. Below this, the 215L module provides Hi and Low Pass Filters, which are perfect for broad-stroke tone control.

The Low-Pass dial range extends from 500Hz to 20K using a gentle 6dB per octave shape, whilst the Hi-Pass offers a 20Hz-600Hz range at a slightly more aggressive 12dB per octave. Also, a power button exists to enable or bypass this module, whilst the final SC button, when enabled, channels the filters into the side-chain signal path for the Vision Channel Strip's Dynamics module, of which more shortly.

Moving up and to the right, the 235L module performs Gate/Expansion duties with a Threshold button dial at the top determining the dynamic 'start point' of gating/expansion (with a range between 25 and -45dB), and a Release dial at the bottom controlling how quickly or slowly a sound will shut the gate once it's opened, with a range from 50mS to three seconds, which allows for a huge range of possible applications.

The Depth dial controls the gain difference between processed and unprocessed signals (whether gated or expanded), whereby higher settings ramp up the amount of attenuation beneath the Threshold level.

There's a usefully scalable dial here, so that whilst the full range of operation is 80dB, half of the dial's range concerns itself with fine-tuning across a 9dB range, whose purpose is to achieve less detectable levels of gating. The Attack time of the Gate is also switchable between two positions. Normal mode (N) sees the Gate responding within 25 milliseconds, whilst Fast mode (F) accelerates this to 100 microseconds.

Below the Gate lies the 225L module which provides Compression or Limiting. Like the Depth control within the Gate, the Ratio dial here is scaled with the first three-quarters of its range dedicated to settings between 1:1 and 10:1, before the final quarter extends to infinity:1, providing limiting. Attack time is controlled via a Fast, Medium or Slow switch, whilst Release times are offered between 50mS and three seconds.

Both New and Old compressor modes are provided which vary between Feed-Back and Feed-Forward designs, altering the sonic character and response of the compressor. An 'On' button enables this module, whilst another column of LEDs provides visual feedback of gain reduction amount.

The final module is the largest with the 550L module providing four-band parametric EQ. A toggle button at the bottom enables this to be placed before or after the Dynamics stage, above which the dual-function dials control tone.

The blue rotating dial chooses a central frequency for each band, whilst the white one chooses gain offset. The outer bands can function as bell shapes or as shelf filters, whilst the final, longer LED display on the right-hand side keeps you abreast of the final output level after all processing.

The five modules combine beautifully here to provide a comprehensive, true API emulation. Whilst UAD fans have been able to enjoy virtual SSL and Neve mixes for some time, this is UAD's most comprehensively modelled channel strip to date and it's hugely rewarding to work with.

For Apollo users, tracking through this plug-in will feel like a step back in time to a golden period in recorded music history, whilst Satellite and PCIe-based users will enjoy running instruments and audio recordings through the plug-in to bring a similar feel to the mix stage of productions.

Whether you're interested in bringing power and presence to warm basses, processing vocals with extra power, or creating an API drum buss with tough compression and EQ settings to bring your beats right to the front of your speakers, this emulation offers enough variation to cater for most needs. If you love the sound of API, it won't fail to impress.