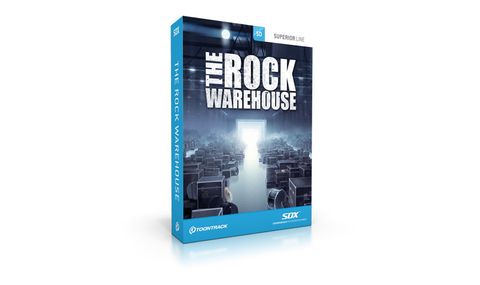 Toontrack's Rock Warehouse offers a diverse range of drums that will appeal to the widest part of Toontrack's user-base. If you can't get the rock drum sound you're after with this set, we'd suggest you start playing jazz.

We've tried out enough drum sample libraries to know the score by now: big-name producer, recorded in a world-class studio by a famous drummer and more round hitty things than you can shake your 5As at. Well, that's what we get here with Toontrack's latest.

In this case, the man twiddling the knobs is Randy Staub, the man behind monster drum sounds for recordings such as Metallica's Black Album, among others. Staub recorded the sounds in Vancouver's Warehouse studio, armed with one of only three Neve Air desks ever made, and the man whacking the tubs was Ryan Vikedal, formerly of Canadian power-balladeers, Nickelback.

The samples are arranged into three kits from Ayotte (six-piece), Gretsch (six-piece) and Dunnett (four-piece titanium), and a selection of eight snare drums, plus 15 cymbals (10" splash - 22" ride), and a tambourine.

Of course, you can mix any element from all of these kits to create your own, and Staub and Toontrack have provided seven 'Combined Presets' (kit and mixer settings) for you to get started.

As you might expect from a convergence of the former 'Back sticksman and engineer, this set of sounds is all about the fat backbeats, booming low end and big room ambience. This is displayed in the preset kits, which actually sound (intentionally) quite processed. Many have EQ and compression applied for you, resulting in round, clean and pristine rock drum sounds.

As usual, there are a myriad of mic positions for you to mix, and by fiddling with the ambience settings and Superior's built-in gates, it's possible to create a stadium rock sound so huge, you'll be pointing your sticks and mouthing your fills as you play them.

So, if you're the kind of drummer that yearns for those flam-peppered semi-quaver triplet fills that occur just before the key change, this one's for you. However, if that's not you, keep your mind open.

Tweaking the kits and mixer settings also lets you roll back the sheen for some more aggressive, lo-fi sounds that work well for indie, alternative rock and metal, and in fact the 20 mic channels means you'll never get bored with creating your own sounds.