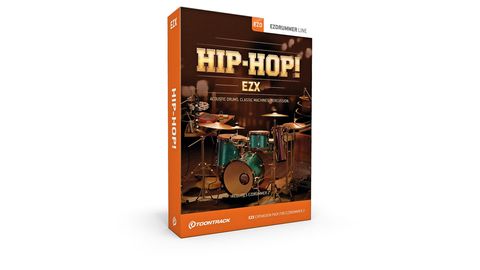 If you're looking to embellish your live set-up with some electronic sounds via pads and a laptop, we'd whole-heartily recommend it. At this price, you won't find better.

The formula for producing a drum sample pack is well and truly set: choose a big-name producer, team him with a well-known drummer, send them to a studio where some massive albums have been made and arm them with some of the best drums, mics and outboard gear money can buy.

That's all good, and we've benefi ted hugely from these advances in sound with our e-kits. But not everyone plays classic rock. Some people play more groove-based music, and capturing that authentic sound with standard acoustic samples is diffi cult. Unless you're Toontrack, that is…

No matter what sounds you're dealing with, someone needs to produce it. In this case, it's Toontrack mainman Mattias Eklund and Alexander Juneblad (The Supreme Beatmaker Academics).

In true Toontrack style, your sounds are loaded into virtual 'slots' on a drum kit, the core of which looks pretty standard - a four-piece kit with hats, crash, ride and splash cymbals, and the main thrust of the sounds is derived from acoustic drum sounds.

In addition to this, though, are percussion, drum machines, sample pads and an effects cymbal. What this means is that for every 'kit' you can have a whopping 39 different sounds!

Let's get this straight: EZX Hip-Hop! is vast. Under the hood are over 200 sounds, all geared around hip-hop, and what's maybe more surprising is that there isn't a lot of fi ller.

Clearly a man that knows his hip-hop history, Academics has built a range of sounds from every golden era of the genre. If you're expecting dated scratch samples or generic sounds then don't. These are tastefully designed snappy staccato snares, round kicks, crunchy hi-hats and processed toms.

The included presets deliver kit sounds spanning everything from early funk-sampled and electro hip-hop, to 'intelligent' '90s sounds like J Dilla and A Tribe Called Quest through to The Neptunes and Kanye West.

One of the best things about the collection is that the heart of each kit - while acoustic - is often gated, clipped or crushed to give a truly authentic sound. Loading in new kits and sounds actually makes you want to play in a different style, so much so that we couldn't get through them quickly enough!

One drawback of playing these types of sounds live is consistency. Whereas we usually rave about dynamic layers for realism, the reverse is almost true in this case. It's most noticeable on hi-hats where playing 'too human' can spoil the groove. With such staccato sounds, it's advisable to take a leaf out of electro-acoustic master Andy Gangadeen's book, and kill some of the dynamics from your pads.

Toontrack has pushed the boat out on this one. It's refreshing to see such a great, and vast, collection of sounds aimed not only at production whizzes, but actual drummers with sticks.