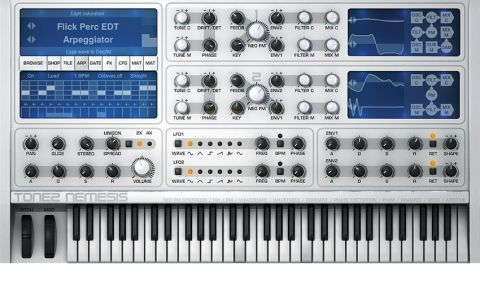 Powerful, flexible and different, Nemesis is a synth that any producer of high-impact electronic music will be blown away by.

FM (Frequency Modulation) synthesis is well represented in the software domain, perhaps most famously in the shape of Native Instruments' FM8. Fellow German developer Tone2 has earned many fans over the last few years with deep, powerful synths such as RayBlaster and Saurus, and a range of expansion soundsets delivering off-the-peg sounds tailor-made for dance music.

With its latest, Nemesis (VST/AU), it claims to have invented a new form of FM synthesis in the shape of "NeoFM". The general thrust of this is a combination of FM/PM (Phase Modulation) synthesis but presented in a more flexible way than has been seen before, and with a more approachable interface.

Nemesis centres on a twin-oscillator architecture, with two waveforms per oscillator. Within each oscillator, the waveforms are suitably labelled Modulator (M) and Carrier (C), but they aren't limited to sine waves, as is the case with the most basic FM synths.

Instead, each can be sourced from an extensive list of 119 waveforms. Each oscillator also features individual waveform Tuning, oscillator start point (Phase), oscillator Drift or Detune (choose one or the other), and Feedback controls.

Both Modulator and Carrier sections have their own digital Filter and Mix knobs (this is usually just a level control), and Envelope 2 is hardwired to the Carrier's filter with its own control for setting modulation amount/depth.

The big Neo FM knob usually (see below) controls the amount of modulation brought to bear on the carrier by the modulator, and is hardwired to follow Envelope 1 with its own amount setting. NeoFM depth can also be set to follow note pitch with the Keytrack control.

The filter offers a super-steep 90dB/octave cutoff, and it works directly on the oscillator's harmonics, rather than its audio output, gradually removing the waves' partials as the knob is lowered. With the filter at zero, you're always left with a sine wave and nothing more.

That's the basic oscillator setup, then. However, Tone2 have taken these building blocks and built 22 synthesis modes on them by modifying the signal flow and functionality. Seven of these are variations on the NeoFM concept, including wave synced options, a vintage DX7 emulation and two sub-oscillator variants.

The others include waveshaping, wavetable, phase distortion, PWM, ring modulation, and resonant and formant synthesis. For each type, the Neo FM knob takes on a slightly different role - the signal flow block diagram to the right changes to illustrate what's happening.

In some modes there's no interrelation between the Modulator and Carrier (PWM, for example, where the Neo FM knob applies pulse width modulation to the Carrier), while in other cases (Wavetable) the relationship becomes quite complex.

Furthermore, the number of output signals also varies from one (Wavetable) to three (RingMod, where the Neo FM knob controls the ring modulation level). And remember, with two oscillators available, you can mix up synthesis modes within a single patch.

As you may have gathered, Nemesis is all about shaping sounds at the core oscillator level, so it's no surprise to find an Additive Spectral Editor in the waveform section. This lets you manually set the gain levels for the first 16 partials, but it also includes 39 preset spectrum edit functions for modifying all partials together.

The fact that this is always available, no matter what synthesis mode is selected, means that hardcore synthesists are in for a real treat - and even more so when you add in the ability to import and export waveforms as WAVs.

Beyond the oscillators, Nemesis also features a Unison function, a global volume envelope, two syncable LFOs and a 12-slot Modulation Matrix. There's also a very capable Arpeggiator, a gate sequencer, two effects slots (accessing a menu of 33 effects) and a range of final output processing options, including EQ presets and various clipping modes. Finally, a selection of microtuning options influence how Nemesis handles chords and adjacent notes, having a bearing on how 'fat' it sounds.

Nemesis includes over 1000 presets presented in a categorised browser with tagging but - alas - no search function. In typical Tone2 style, there's a strong bias towards contemporary and progressive club sounds, including tons of arps and sequences. Some of the patches are a little too processed, but underlying that is a very clean and upfront sound, and a definite sensation of your ears being plugged straight into the oscillators - in a good way!

For FM patches, the Neo FM control delivers some pretty edgy sounds, and the ability to move between extremes at the twist of a knob is very effective. We also really enjoyed perusing the NeoFM-based presets, from the 80s gaming- style noises of the Chip bank to the generally superb Effects, Pads and Atmospheres categories. There are also plenty of vintage-style FM patches onboard - DX Piano, anyone?

The only fly in the ointment is the CPU hit, which gets quite significant with many patches. The Shop button launches the patch expansion page of Tone2's website in your browser, where there's already one expansion available, offering 200 sounds for £36, with three more coming soon.

Nemesis is an impressive feat of soft synth engineering, offering enough depth to keep serious tweakers happy and good accessibility for everyone else. In summary, it's another excellent and preset-rich synth for dance and electronic music producers from a developer at the height of their powers.