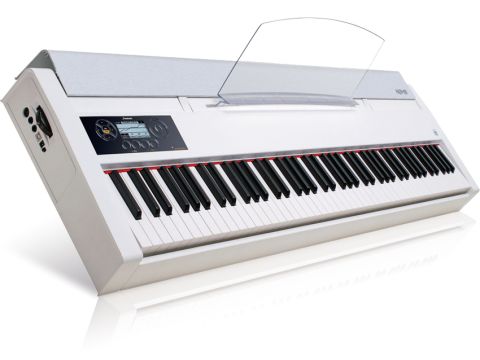 The Numa looks great and plays like a dream, but it's not very versatile and the design is slightly flawed

When it comes to MIDI controllers, every computer musician has different needs. For laptop users and those short on space, a 25-note keyboard fits the bill, while most others are happy with a four- or five-octave device.

If you're a serious player, though, the chances are that you'll want a full-size keyboard with a piano-like feel, which is precisely what StudioLogic hopes to offer with the Numa.

Designed by Axel Hartmann (developer of the acclaimed Neuron synthesiser), the Numa is weighty, but not outrageously so. It certainly turns heads, too - when it was hooked up to our office test machine, it drew attention like no other MIDI keyboard has.

That said, some observers commented that the casing looks rather boxy, so its aesthetics might not be to everyone's taste.

There's an aluminium panel on the top of the keyboard - the rest of the casing is constructed from ABS - which slides back to give you extra space for a laptop or second controller. When extended, you can slot in the supplied music stand; this is fine for single sheets, but its shallow, vertical design and the lack of page holders means it'd struggle to support anything more substantial.

The only other feature on the top surface is the Easy Control System panel. This comprises a touch-sensitive panel and a backlit LCD display. In the default Play Mode, you can quickly tweak key settings, but for more detailed changes, you have to use Edit mode.

The ECS also enables you to create and store YouPlay presets. These are personalised velocity curves - the Numa analyses your playing style and generates them for you. This isn't an essential feature, but it works pretty well.

Sadly, the same can't quite be said of the control system in general. The ECS panel looks nice, but we'd prefer proper buttons and a data entry slider. Touch-sensitive dials are fine on iPods, but here it feels like StudioLogic was more concerned with aesthetics than practicality.

The Numa can operate via USB or mains power (an adaptor is supplied) and both connections are positioned on the keyboard's left-hand side. You'll find a MIDI Out, pedal inputs (disappointingly, you don't get a sustain pedal in the box) and an assignable wheel in the same place.

We're not sure about putting the wheel here, to be honest. It keeps the Numa's top panel looking clean, but it's not exactly accessible. Also, it doesn't self-centre, which makes using it for performance pitchbending a bit of a non-starter.

On the plus side, the wheel is backlit with a blue LED that fades in and out as you turn it. There's no practical benefit to this, but it looks lovely.

The Numa has clearly been designed primarily for players rather than programmers, and the good news is that the former will love it. The keyboard's graded hammer action is fantastic, and certainly helps to justify the high price. Pair it with a high-quality piano plug-in and the user experience is truly wonderful.

Unless you've got money to burn, the Numa probably won't tempt you, and in truth, it's most likely to interest design-conscious studios. It feels good to report, however, that it plays as well as StudioLogic claim. Yes, it's expensive and one-dimensional, but it's also that rare thing: a MIDI keyboard with genuine character.