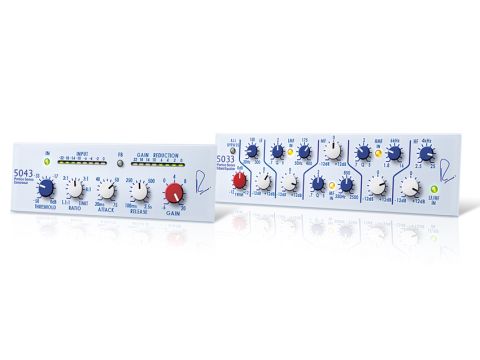 Undoubtedly among the f¬inest analogue emulations that money can buy, though for the price, you'd expect nothing less.

Five years ago, the Portico hardware from RND - that's Rupert Neve Designs - hit the shops. Since then, plug-in emulation quality has improved so enormously that Neve feels comfortable putting his revered name to these official emulations.

Both plug-ins are mono and stereo, and aside from that, there are no further extras. On the face of it, the 5043 Compressor is a typical design with nothing stellar in the attack/release specs.

The 5033 EQ doesn't look massively complex either, delivering three parametric bands plus high- and low-shelving. The parametrics can be individually bypassed, while the shelves share a bypass.

Frequency overlap for parametric bands isn't massive, although collectively they cover a considerable range (50Hz to 16kHz). By contrast, the shelves are more flexible, with the high-shelf ranging from 2.5kHz to 25kHz. Gain is +/-12dB for all bands, with a +/-12dB input trim.

It's worth noting that both plug-ins include their own bypass button whereby the signal still passes through the modelled input/output transformers and amplifier sections.

Going on spec and appearance alone, both plug-ins look pretty basic - in use, they're nothing of the sort.

First up, the 5033 EQ. Although there's no Q control for the shelves, as you move outwards to the frequency extremes, the shelf gradually shifts from a regular boost or cut (like an SSL E-Series) to an overshoot design with its inherent 'dip before lift' when boosting (so, more typical Neve).

The dip is more pronounced than most other EQs - including vintage Neves - and careful frequency selection can lead to very different results. The parametrics have adjustable Q, so achieving high boost precision is also easy and more flexible than with older Neve designs (where Q increased with gain).

Overall, the top-end sparkle and low-frequency precision is impressive and belies the limited 12dB gain. The 5043 can produce two very distinct effects, but when driven hard, we found both modes good for coloured, snappy snares and punchy bass.

For mix or bus compression, the feedforward setting gets you the more modern quick release VCA sound, but feedback mode can be great for more gentle material. As ever, the material dictates what works best, but being able to switch between the two is a massive bonus when hunting for the right effect.

With direct hardware emulations like this, you get what you're given, so there's no high-pass/low-pass filters on the EQ, and no sidechaining or automatic makeup gain on the compressor. We can live with that, but the big downer here is, of course, the 'boutique' price.

Still, given the CPU efficiency of these, you will be able to use them pretty liberally, which is a relief. We'll leave you to decide whether you can justify such a purchase, then. Note that there is a trial version for those who have an eLicenser dongle.

Although convolution was for a time the biggest buzzword in analogue emulation, the emphasis has since shifted to circuit-level modelling.

Here, each component and the interaction between them is modelled. It's particularly effective for situations where nonlinearity is key, such as saturation (which convolution can't recreate anyway).

Yamaha's take on this (Virtual Circuit Modelling) has been around for some time, and it crops up in two Steinberg VST plug-in bundles: the Yamaha Vintage Plug-In Collection and this one.

The CPU usage required by circuit-level modelling seems to vary greatly from plug-in to plug-in, and a high CPU hit can be a big turn-o­f for stock effects such as EQ and compression.

However, in our tests, we found the RND plug-ins to be fairly CPU-light, with the 5043 a bit hungrier than the 5033. One of our 3GHz Mac cores managed 35 mono EQs or 28 mono compressors.